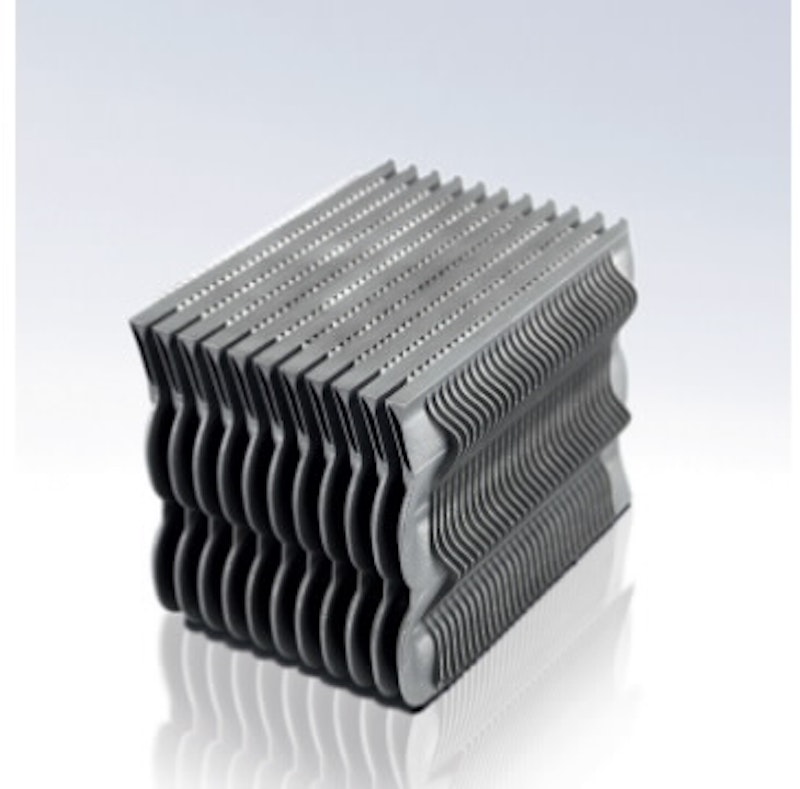 Materialise, a leading additive manufacturing and 3D printing service bureau, has announced they are planning to offer an aluminium alloy. Materialise CEO, Fried Vancraen, announced at RapidPro, that AlSi10Mg will soon be available to their industrial customers. This is the first metal to join Materialise's portfolio of more than twenty polymers. IDTechEx are pleased to welcome Dr Volker Schillen of Materialise to present at 3D Printing Europe 2015 (For more information, and to book your place, see www.idtechex.com/3dp-europe).
With a facility of more than 120 3D printers and wide variety of technologies, Materialise owns the world's largest Additive Manufacturing capacity based in one location. However, owning a factory full of industrial grade 3D printers is increasingly common. GE Aviation has announced it plans to open a manufacturing facility at Auburn, AL to produce 100,000 fuel nozzles by 2020.
With aluminium 3D printing, the Belgian-based additive manufacturing is keeping up with a strong trend in the industry. According to IDTechEx research, the market for 3D metal printers is currently $440m, and is expected to grow to $6b in 2025. It allows rapid prototyping in the same alloy that will be used for traditional production. Metal 3D printing is also finding applications in many other steps of the product development cycle. Tooling, cores and moulds for conventional manufacturing, direct manufacturing of complex end-use parts and even direct printing of whole objects are now possible. Increasing numbers of companies are using additive manufacturing of metals including Rolls Royce, John Deere, Siemens and Lockheed Martin. More information on the uses of 3D printing can be found in Applications of 3D Printing 2014-2024: Forecasts, Markets, Players (www.idtechex.com/3dapps).
AlSi10Mg is a typical casting aluminium alloy, and many designers are looking to continue using the same alloys when switching to 3D printing. 6000 series alloys are often used for parts with thin walls and complex geometries. It is low density with good strength and thermal properties. The magnesium-silicide inclusions harden the alloy and limit shrinkage. It is frequently used in automotive and aerospace industries.
Some manufacturers are worried about porosity in 3D printed parts leading to weakness but research by K. Kempen et al. has shown mechanical properties like tensile strength, elongation, Young's modulus, impact toughness and hardness for AlSi10Mg parts produced by Selective Laser Melting were comparable or even exceeded those of conventionally cast AlSi10Mg.
AlSi10Mg is already offered by EOS and Renishaw with their machines. Concept Laser, SLM solutions and LPW Technology also offer aluminium alloys for additive manufacturing. More information about materials used for 3D Printing can be found in 3D Printing Materials 2015-2025: Status, Opportunities, Market Forecasts (www.idtechex.com/3dmats).
Their process gives a layer thickness of 30 - 100 µm, which is standard for this kind of technology. The maximum build area is 250 x 250 x 290 mm, which suggests they have a mid-range selective laser sintering machine. IDTechEx has benchmarked and performed analysis on hundreds of commercially available 3D printers, which can be found in 3D Printing 2015-2025: Technologies, Markets, Players (www.idtechex.com/3d). Materialise claim on their website that, "Dimensions are unlimited as components may be composed of several sub-parts." but the extra design freedom gained and the quality of the object will be compromised if several parts need to be attached together.
Top image: Heat exchanger printed in AlSi10Mg
Source: Within, 3T, EOS
Learn more at the next leading event on the topic: 3D Printing & 3D Electronics Europe 2020