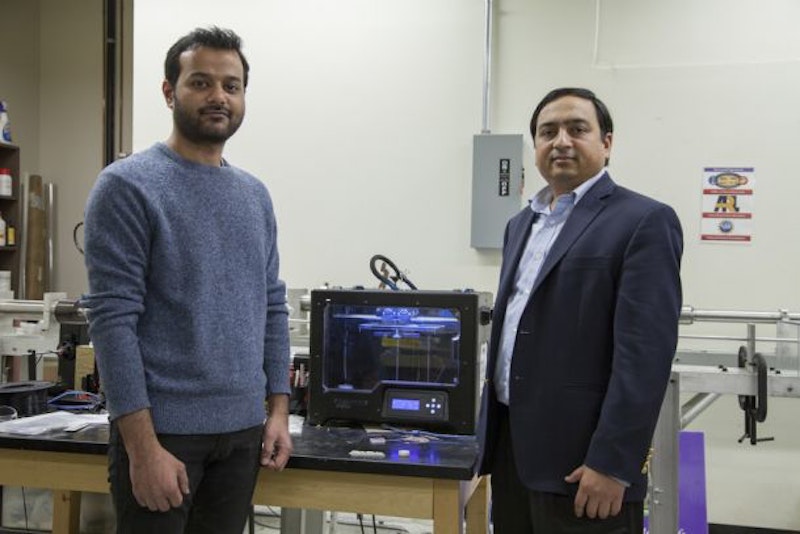 A team of materials scientists at NYU Tandon School of Engineering has developed the first process to 3D print components of syntactic foam — extremely strong and lightweight composites used in vehicles, airplanes, and ships. Their breakthrough holds particular promise for submarines because it will enable manufacturers to print components with complex shapes capable of surviving stresses at greater depths.
Syntactic foams, a mixture of billions of microscopic hollow glass or ceramic spheres in epoxy or plastic resin, are widely used in submarines like James Cameron's Deepsea Challenger and the next-generation Alvin deep-sea explorer because of their remarkable buoyancy and strength.
In two papers published in JOM, the Journal of the Minerals, Metals & Materials Society, Nikhil Gupta, an associate professor of mechanical and aerospace engineering, student researchers in his Composite Materials and Mechanics Lab at NYU Tandon's Mechanical Engineering Department, and collaborators in India reported they had developed syntactic-foam filaments and processes to 3D print them using off-the-shelf commercial printers.
Currently, syntactic-foam parts are made by injection molding, and the parts must be joined with adhesives and fasteners, introducing vulnerabilities. 3D printing — also called additive manufacturing — could allow manufacturers to make complex parts such as vehicle shells and internal structures as single units, making them far stronger. Led by Ashish Kumar Singh, a doctoral student under Gupta, the team described how they overcame hurdles to additive manufacturing, such as the tendency of microspheres to crush during the mixing process and to clog the printer nozzle. They also demonstrated the recyclability of the filaments, making them environmentally friendly.
The researchers developed filaments of high-density polyethylene plastic (HDPE), a material used to manufacture industrial-grade components, and microspheres made of recycled fly ash. (Encapsulating fly ash — a waste byproduct of coal combustion — in the syntactic foam also keeps the toxic material out of landfills.)
"Our focus was to develop a filament that can be used in commercial printers without any change in the printer hardware," said Gupta, who collaborated with colleagues at the National Institute of Technology Karnataka, Surathkal, India (NIT-K). "There are a lot of parameters that affect the printing process, including build-plate material, temperature, and printing speed. Finding a set of optimum conditions was the key to making the printing of high-quality parts possible."
Gupta, who recently collaborated with industry partners to create an on-line design tool for syntactic foams, explained that that the hollow spherical particles used in the study have a diameter of just 0.04 mm to 0.07 mm. This size and shape combination makes it possible for the microspheres to flow through the 1.7-mm 3D-printer nozzle without choking the flow of material.
He explained that the process required the team to minimize crushing of the fragile hollow particles during mixing with the HDPE resin so that the resulting filament could have low density.
"We want to add as many hollow particles as possible to make the material lighter, but having a greater number of particles means more of them will break during processing," added Singh. "The survival of hollow particles first during filament manufacturing and then in the 3D-printing process requires a lot of process control."
Ignoring the benefits that the new process will bring in manufacturing complex components, the 3D-printed materials alone showed tensile strength and density comparable to those made by injection molding.
"The results show that the properties of 3D-printed syntactic-foam components are at par with the widely used traditional injection-molded parts of the same material," said Singh.
Gupta said the team, which includes Brooks Saltonstall, an undergraduate researcher at NYU Tandon; Balu Patil and Mrityunjay Doddamani of NIT-K; and Niklas Hoffmann, a visiting student from the Clausthal University of Technology, Germany, will now focus on optimizing the material properties for various applications, such as underwater vehicles capable of functioning at specific depths.
The research was supported by the U.S. Office of Naval Research.
Source and top image: NYU Tandon School of Engineering
Learn more at the next leading event on the topic: 3D Printing & 3D Electronics Europe 2020