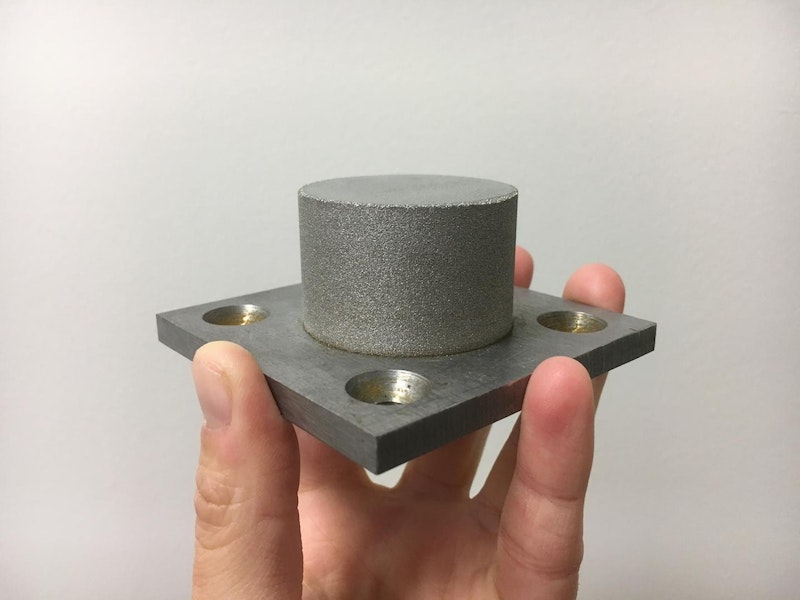 Researchers have now demonstrated the ability to create amorphous metal, or metallic glass, alloys using three-dimensional (3-D) printing technology, opening the door to a variety of applications - such as more efficient electric motors, better wear-resistant materials, higher strength materials, and lighter weight structures. For more information see the IDTechEx report on 3D printing materials.
"Metallic glasses lack the crystalline structures of most metals - the amorphous structure results in exceptionally desirable properties," says Zaynab Mahbooba, first author of a paper on the work and a Ph.D. student in North Carolina State University's Department of Materials Science and Engineering.
Unfortunately, making metallic glass requires rapid cooling to prevent the crystalline structure from forming. Historically, that meant researchers could only cast metallic glasses into small thicknesses. For example, amorphous iron alloys could be cast no more than a few millimeters thick. That size limitation is called an alloy's critical casting thickness.
"The idea of using additive manufacturing, or 3-D printing, to produce metallic glass on scales larger than the critical casting thickness has been around for more than a decade," Mahbooba says. "But this is the first published work demonstrating that we can actually do it. We were able to produce an amorphous iron alloy on a scale 15 times larger than its critical casting thickness."
The technique works by applying a laser to a layer of metal powder, melting the powder into a solid layer that is only 20 microns thick. The "build platform" then descends 20 microns, more powder is spread onto the surface, and the process repeats itself. Because the alloy is formed a little at a time, it cools quickly - retaining its amorphous qualities. However, the end result is a solid, metallic glass object - not an object made of laminated, discrete layers of the alloy.
"This is a proof-of-concept demonstrating that we can do this," says Ola Harrysson, corresponding author of the paper and Edward P. Fitts Distinguished Professor of Industrial Systems and Engineering at NC State.
"And there is no reason this technique could not be used to produce any amorphous alloy," Harrysson says. "One of the limiting factors at this point is going to be producing or obtaining metal powders of whatever alloy composition you are looking for. For example, we know that some metallic glasses have demonstrated enormous potential for use in electric motors, reducing waste heat and converting more power from electromagnetic fields into electricity."
"It will take some trial and error to find the alloy compositions that have the best combination of properties for any given application," Mahbooba says. "For instance, you want to make sure you not only have the desirable electromagnetic properties, but that the alloy isn't too brittle for practical use."
"And because we're talking about additive manufacturing, we can produce these metallic glasses in a variety of complex geometries - which may also contribute to their usefulness in various applications," Harrysson says.
Source and top image: North Carolina State University
Learn more at the next leading event on the topic: 3D Printing & 3D Electronics Europe 2020