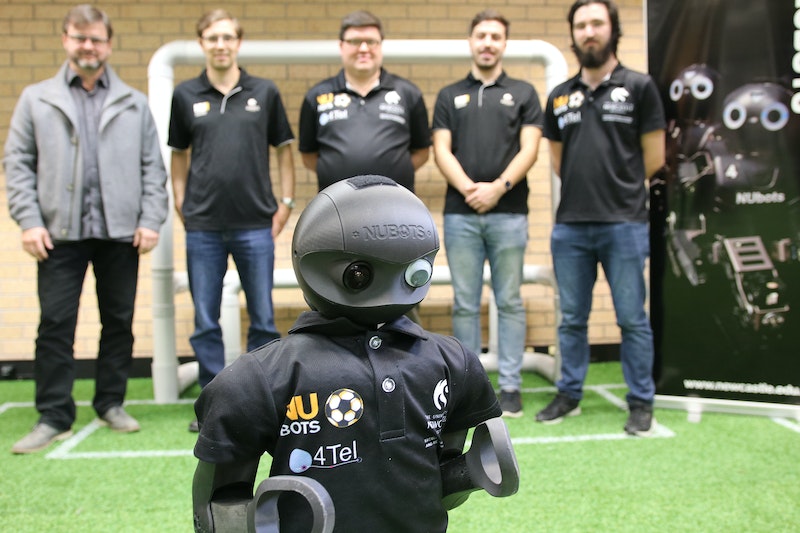 Standing at almost one metre tall, the NUbots will be the only Australian team to compete in the teen division of the humanoid league where autonomous robots with a human-like body and human-like senses verse each other in a game of two, ten minute halves.
Team Leader of NUbots and computer engineering student, Alex Biddulph, said much like a human soccer player, a NUbot can kick a ball, throw a penalty and even wave to its fans.
"We've programmed the robots to visually locate a ball on the soccer field, navigate a path to it, judge space and distance, and attempt to score a goal.Like professional soccer players, NUbots may also be inclined to drop to the ground and throw a tantrum if they miss a shot."
Equipped with a 3D printer on campus, Alex said all parts of the robots were printed on site using carbon fibre and onyx materials.
"Printing with onyx gives our robots a unique black finish and the carbon fibre inlay creates a high strength to weight ratio, so they are light but also very sturdy and durable. Our NUbots were world champions of the RoboCup in 2006 and 2008 so we're hoping to reclaim the championship title this year in preparation for next year's RoboCup hosted in Sydney."
The RoboCup aims to develop a team of fully autonomous human-like robots that can win against the human world soccer champion team by 2050, but most importantly represents a global launch pad to collaboarate artificial intelligence breakthroughs that could transform the future of the world.
Head of the Newcastle Robotics Laboratory at the University's School of Electrical Engineering and Computing, Associate Professor Stephan Chalup, said the soccer fields were comparable to a lab environment to test coding algorithms.
"Artificial learning is the core focus of the competition and impact stems from the application of the software, the algorithms, and the concepts behind it rather than the robots themselves. The coding created and shared between teams at the competition can have all kinds of meaningful applications in health and medical imaging, agriculture, facial recognition, transport and defence." For more information see the IDTechEx report on mobile robots and drones in material handling and logistics.
Associate Professor Chalup said the future for artificial intelligence was bright, with Australia leading the way as one of the top research countries.
"Australia is making meaningful progress in the area of artificial intellingence and is developing ideas that are influential across the world. Whilst assimilating human behaviours so that robots can interpret emotions still presents a challenge in the automoation industry, events such as the RoboCup encourages global collaboration, bringing us one step closer to our goal of creating meaningful outcomes for society."
The RoboCup 2018 will take place in Montréal, Canada from 16 June to 22 June.
Source and top image: University of Newcastle