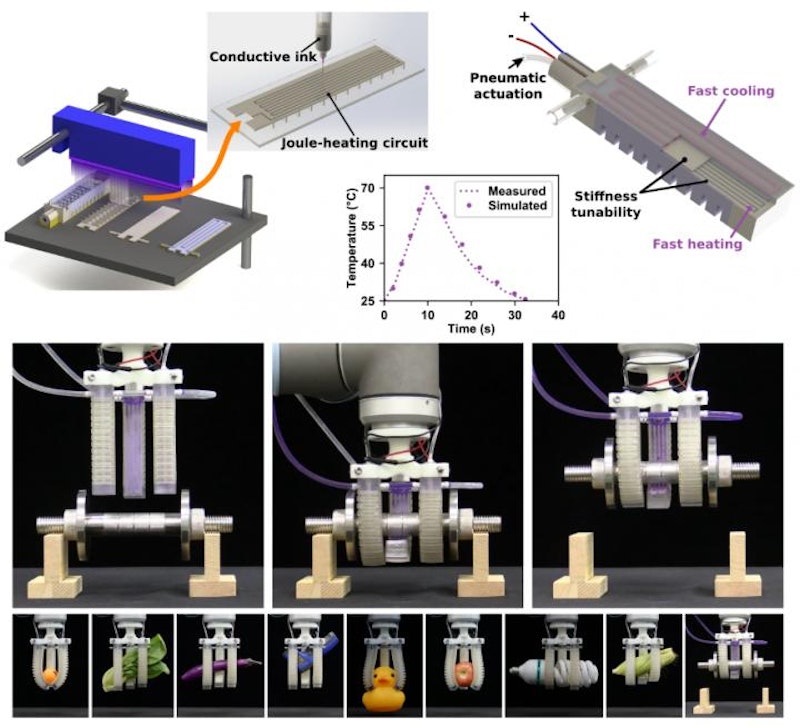 Traditional robotic systems with rigid parts often pose a threat to human operators. Recently flourishing soft actuators and robots, in contrast, offer excellent adaptivity to surroundings and safe, coexisting interaction with humans. However, their competence in load-bearing tasks is undermined by the inherent low-stiffness nature of constituent materials like silicone rubbers. For more information see the IDTechEx report on 3D Printing 2018-2028.
In search of stiffness-tunable materials that help increase the load capacity of soft robotic systems without sacrificing their compliance during robot-object interaction, thermally activated shape memory polymers (SMPs) stand out as a promising candidate. Not only are SMPs capable of reversibly changing stiffness by two to three orders of magnitude, they are also compatible with 3D printing. However, thus far it has been reported that SMP-based soft actuators generally suffer from limitations such as slow responses, small deformations and difficulties in automated fabrications with microfeatures.
Researchers from the Singapore University of Technology and Design (SUTD) and Shanghai Jiao Tong University (SJTU) recently proposed a paradigm to use finite-element simulations and hybrid multimaterial 3D printing to design and manufacture fast-response, stiffness-tunable (FRST) soft actuators which are able to complete a softening-stiffening cycle within 32 seconds.
"We combine a commercial inkjet multimaterial 3D printing technology with the direct-ink writing approach to fabricate our fully printed FRST actuator," said Assistant Professor Qi (Kevin) Ge from SUTD's Science and Math Cluster, who is one of the co-leaders of this project. "The stiffness tunability is provided by an embedded SMP layer, and the fast response is enabled by embedded heating and cooling elements."
In fact, the integration of the SMP layer into the actuator body enhances its stiffness by up to 120 times without sacrificing flexibility and adaptivity. A deformable conductive circuit printed with a silver nanoparticle ink activates the rubbery state of the SMP by localized Joule-heating. Upon deforming the actuator with pressurised air, the SMP is cooled down with coolant driven through a fluidic channel to lock the geometry.
"The deformed actuator in its stiff state can perform load-carrying tasks, even after releasing the pressurised air. More importantly, a heating-cooling cycle can be completed within about half a minute, which is the fastest rate reported, to our knowledge," said Professor Ge.
"We have also built computational models to simulate the mechanical and thermal-electrical behaviors of our FRST actuator," said Yuan-Fang Zhang, a postdoc researcher at SUTD and co-first author of the paper. "Once validated with experiments, the models are used to guide the design of FRST actuator and provide insights into enhancement of load capacity."
Overall, the designs of the Joule-heating circuit and the fluidic microchannel layer greatly reduce the period of a heating-cooling cycle to about 30 seconds, which significantly enhances the practicability of the thermally responsive stiffness-tunable soft actuator, rendering it suitable to further applications. Professor Guoying Gu, who is a co-leader of this project at SJTU, said, "To showcase the high load capacity and shape adaptivity of our prototype, we have devised a robotic gripper with three FRST actuators that can grasp and lift objects with arbitrary shapes and various weights spanning from less than 10 g to up to 1.5 kg."
Source and top image: Singapore University of Technology and Design