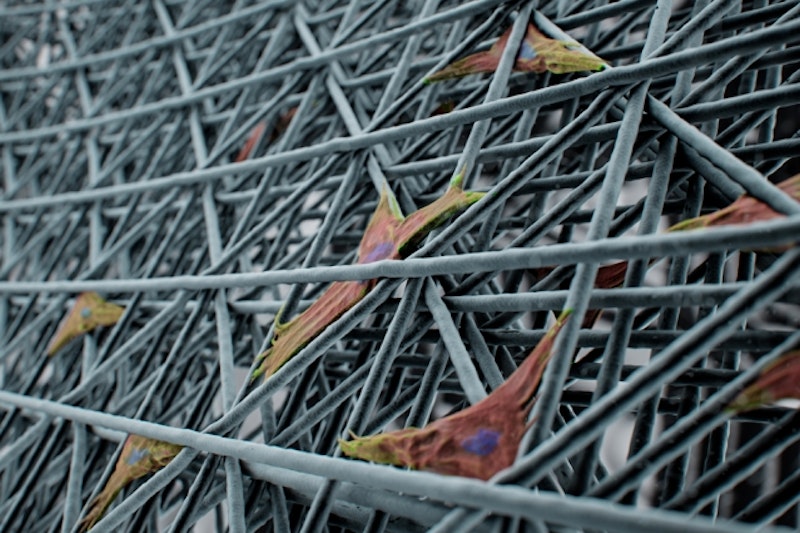 A new way of making scaffolding for biological cultures could make it possible to grow cells that are highly uniform in shape and size, and potentially with certain functions. The new approach uses an extremely fine-scale form of 3-D printing, using an electric field to draw fibers one-tenth the width of a human hair. For more information see the IDTechEx report on 3D Printing in the Medical and Dental Industry 2019-2029.
The system was developed by Filippos Tourlomousis, a postdoc at MIT's Center for Bits and Atoms, and six others at MIT and the Stevens Institute of Technology in New Jersey. The work is being reported in the journal Microsystems and Nanoengineering.
Many functions of a cell can be influenced by its microenvironment, so a scaffold that allows precise control over that environment may open new possibilities for culturing cells with particular characteristics, for research or eventually even medical use.
While ordinary 3-D printing produces filaments as fine as 150 microns (millionths of a meter), Tourlomousis says, it's possible to get fibers down to widths of 10 microns by adding a strong electric field between the nozzle extruding the fiber and the stage on which the structure is being printed. The technique is called melt electrowriting.
"If you take cells and put them on a conventional 3-D-printed surface, it's like a 2-D surface to them," he explains, because the cells themselves are so much smaller. But in a mesh-like structure printed using the electrowriting method, the structure is at the same size scale as the cells themselves, and so their sizes and shapes and the way they form adhesions to the material can be controlled by adjusting the porous microarchitecture of the printed lattice structure.
"By being able to print down to that scale, you produce a real 3-D environment for the cells," Tourlomousis says.
He and the team then used confocal microscopy to observe the cells grown in various configurations of fine fibers, some random, some precisely arranged in meshes of different dimensions. The large number of resulting images were then analyzed and classified using artificial intelligence methods, to correlate the cell types and their variability with the kinds of microenvironment, with different spacings and arrangements of fibers, in which they were grown.
Cells form proteins known as focal adhesions at the places where they attach themselves to the structure. "Focal adhesions are the way the cell communicates with the external environment," Tourlomousis says. "These proteins have measurable features across the cell body allowing us to do metrology. We quantify these features and use them to model and classify quite precisely individual cell shapes."
For a given mesh-like structure, he says,"we show that cells acquire shapes that are directly coupled with the substrate's architecture and with the melt electrowritten substrates," promoting a high degree of uniformity compared to nonwoven, randomly structured substrates. Such uniform cell populations could potentially be useful in biomedical research, he says: "It is widely known that cell shape governs cell function and this work suggests a shape-driven pathway for engineering and quantifying cell responses with great precision," and with great reproducibility.
He says that in recent work, he and his team have shown that certain type of stem cells grown in such 3-D-printed meshes survived without losing their properties for much longer than those grown on a conventional two-dimensional substrate. Thus, there may be medical applications for such structures, perhaps as a way to grow large quantities of human cells with uniform properties that might be used for transplantation or to provide the material for building artificial organs, he says. The material being used for the printing is a polymer melt that has already been approved by the FDA.
The need for tighter control over cell function is a major roadblock for getting tissue engineering products to the clinic. Any steps to tighten specifications on the scaffold, and thereby also tighten the variance in cell phenotype, are much needed by this industry, Tourlomousis says. The printing system might have other applications as well, Tourlomousis says. For example, it might be possible to print "metamaterials" — synthetic materials with layered or patterned structures that can produce exotic optical or electronic properties. The team included Thrasyvoulos Karydis and Andreas Mershin at MIT, and Chao Jia, Hongjun Wang, Dilhan Kalyon, and Robert Chang at the Stevens Institute of Technology in Hoboken, New Jersey. The work was funded by the National Science Foundation.
Source and top image: MIT
Learn more at the next leading event on the topic: 3D Printing & 3D Electronics Europe 2020