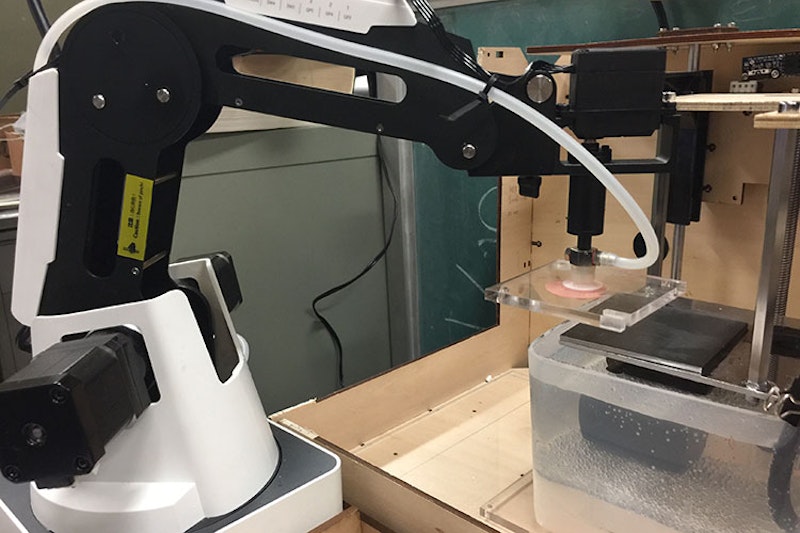 From prosthetics and implants to dental crowns and hearing aids, 3D printers are being used to manufacture a whole host of customized medical devices for patients in need. So, why not organs, too? For more information see the IDTechEx report on 3D Bioprinting 2018-2028.
Not surprisingly, the intricate, mushy tissues that make up most human organs are not as easy to 3D-print as stiff scaffolds for prosthetic devices or chasses for hearing aids. But a new device created by engineers at UC Berkeley promises to make the 3D printing of biomaterials like organs and food a lot more viable.
Living cells require very specific temperature and chemical conditions to survive and will often deteriorate during a lengthy printing session. The new device uses identical printers to create multiple layers simultaneously, and then stacks them one on top of the other to form the 3D structure. This arrangement speeds up the printing process and makes it more likely that the cells will stay alive.
The device also freezes each layer of cells as it is added to the stack, giving the newly-formed biomaterial a better chance of surviving a lengthy storage period.
"The problem with 3D bioprinting is that it is a very slow process, so you can't print anything big because the biological materials will deteriorate by the time you finish," said Boris Rubinsky, professor of mechanical engineering and leader of the team that designed the device. "One of our innovations is that we freeze the material as it is being printed so that the biological material is preserved, and we can control the freezing rate."
A paper describing this work was recently published in the Journal of Medical Devices.
Source and top image: UC Berkeley
Learn more at the next leading event on the topic: Healthcare Sensor Innovations USA 2020