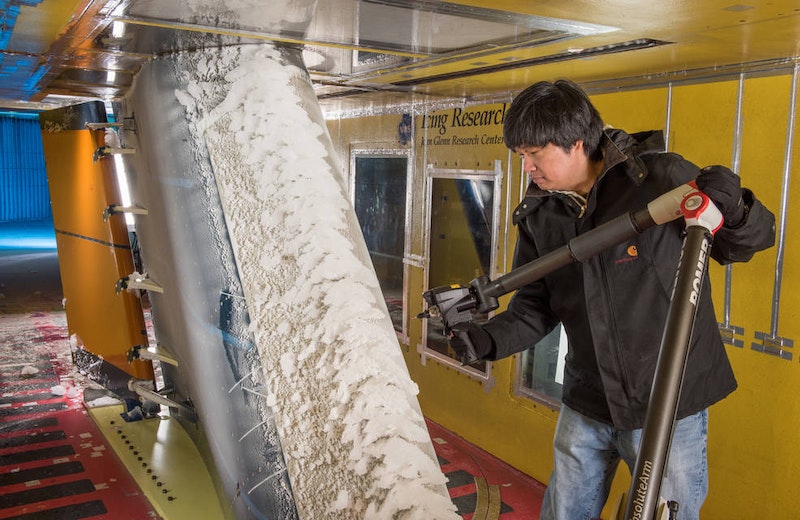 NASA's aeronautical innovators are using the most modern research tools available, including 3D printing, to generate new data that will help airplane makers and operators more efficiently deal with one of aviation's oldest safety challenges - namely, icing. For more information see the IDTechEx report on 3D Printing 2019-2029. That data, which will be publicly available in 2020, is the result of a cooperative five-year research program that involved NASA, the Federal Aviation Administration (FAA), The French Aerospace Lab (ONERA), and several U.S. universities.
"The aviation community has studied icing since before World War II, but thanks to the new tools we have access to we're still learning new things that can help industry," said Andy Broeren, an icing engineer at NASA's Glenn Research Center (GRC) in Cleveland.
The key to this new set of data, which offers a better understanding of ice formation and its effects on an airplane, is the advent of using 3D printing as a research tool. Historically, icing research has relied on generating real ice in a specially equipped wind tunnel that blows super cold water droplets over an airplane surface - often a wing - which then freezes on contact. Under these controlled conditions the resulting ice shapes closely match those formed in nature, but the methods used for documenting and analyzing those shapes have been relatively simple.
"Our most common method was to cut a slice in the ice using a heated metal plate and insert a piece of cardboard into it, then trace the outline of the ice shape with a pencil," Broeren said.
Measurements of those tracings provided some of the data used in computer codes that run simulations to learn more about and predict the effects of various ice shapes on the aerodynamics of an airplane. However, because those tracings were fairly basic in their construction, the fine details of the ice shape were lost, which meant the resulting computer code didn't fully represent what was happening in the sky for real. Researchers through the years have attempted to artificially produce and measure more complex shapes through classic model-making methods that involve use of molds and castings. Those models would then be attached to aircraft surfaces and tested in wind tunnels. With the availability of ever-more-sophisticated 3D printing, and the ability to scan objects to build and manipulate a 3D model in a computer, icing research has entered a new era of productivity.
"When we started this project, we didn't have a really good capability to measure the ice in three dimensions and do a high-fidelity 3D printer rendition of it," Broeren said. "Now, we do."
3D Benefits
Aircraft manufacturers should benefit the most from results obtained by this more modern way of acquiring data on ice shapes, Broeren said. For example, the FAA requires airplane makers to include a certain amount of extra margin for safety in its aircraft designs in case of ice. That margin is based on icing research data that goes back many years.
"If we can improve our understanding of how ice forms and affects aircraft in flight, that higher fidelity data could help us in several important ways," Broeren said.
They include:
The project began in 2015 using the icing wind tunnel at GRC. The research continued through the end of 2018, when tests wrapped up in France at ONERA's wind tunnel. Since then researchers have been compiling, refining, and sharing their results via technical papers and presentations. The final set of data will become public when the five-year agreement officially ends on May 31, 2020.
Source and top image: NASA