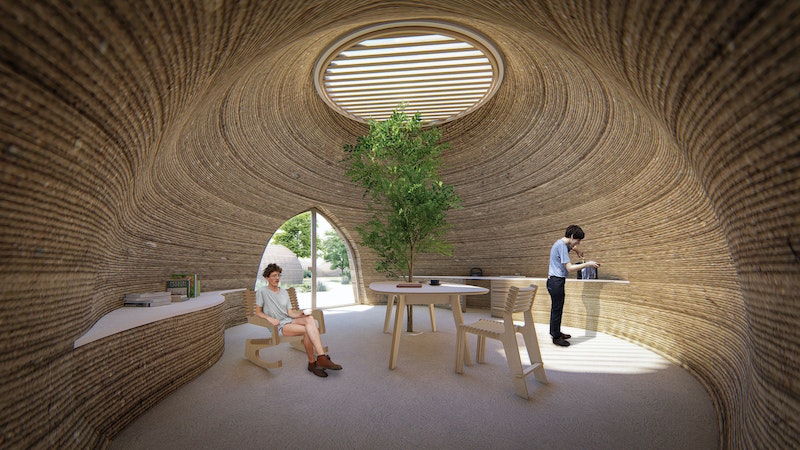 WASP and MC A - Mario Cucinella Architects have embarked on the construction of an innovative model for a 3D printed habitat and will be launching the first prototype near Bologna, Italy. Born from a vision to provide a home for everyone at a time of exponential population increase and an associated lack of affordable housing, TECLA is a new circular housing model, created using entirely reusable, recyclable materials taken from the local terrain. Built using Crane WASP - the latest innovation in on-site 3D construction, TECLA represents a step-change in the move towards eco-housing. For more information see the IDTechEx report on 3D Printing Materials 2019-2029: Technology and Market Analysis.
"WASP takes inspiration from the potter wasp. We build 3D printed houses using earth found on the spot, under a sustainable perspective. The oldest material and a state of the art technology merge to give new hope to the world. GAIA, our first 3D printed house made with raw earth, was born a year ago. Today with our partners we are printing TECLA an entire eco-sustainable habitat. The planet is asking for a joint project that we share with Mario Cucinella," said Massimo Moretti.
"Together with WASP we aim at developing an innovative 3D-printed prototype for a habitat that responds to the increasingly urgent climate revolution and the needs of changes dictated by community needs. We need a paradigm shift in the field of architecture that gets closer to the needs of people, thus finding an answer for the "Earth" within the "earth". A collaboration that becomes the union between empathic architecture and the application of new technologies," said Mario Cucinella.
A United Nations report published in 2017 demonstrates that the current global population of 7.6 billion people is expected to reach 11.2 billion in 2100, and in 2030 nearly 5 billion people are expected to live in cities. Consequently, governments are faced with substantial challenges related to housing solutions. With more and more rural areas being incorporated into cities, it is the idea of city itself that must be challenged.
Taking inspiration from potter wasps, since 2012, WASP (World's Advanced Saving Project) have been developing viable construction processes based on the principles of circular economy, that will create 3D printed houses in the shortest period of time, and in the most sustainable way possible. TECLA will be the first habitat to be built using multiple collaborative 3D printers, offering a greater scope of scale than ever before. Used in the context of a wider masterplan, TECLA has the potential to become the basis for brand new autonomous eco-cities that are off the current grid. 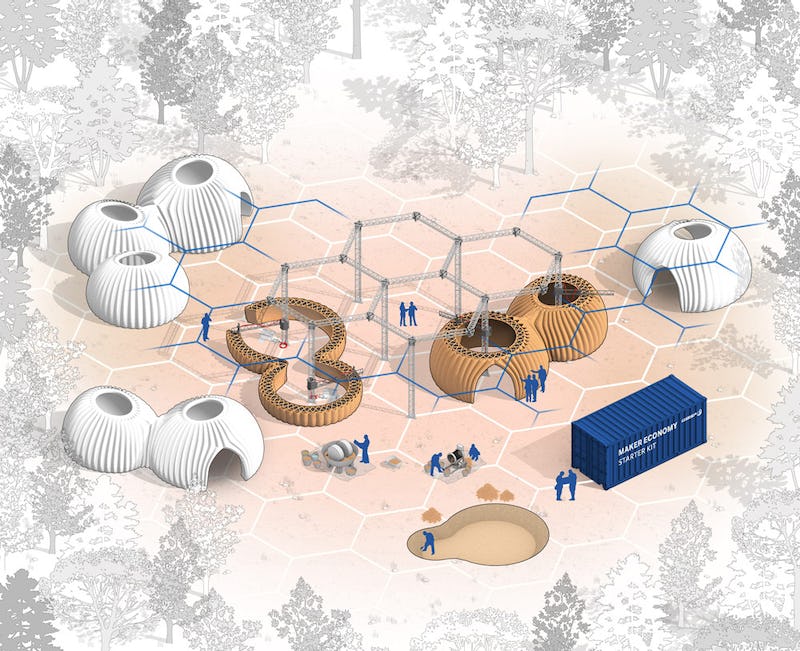 TECLA will be the first house to be entirely 3D printed using locally sourced clay. A biodegradable and recyclable 'km 0 natural' material which will effectively make the building zero-waste. It will be built to adapt to multiple environments, and it will be suitable for self-production through the use of WASP's innovative Maker Economy Starter Kit. This approach will limit industrial waste and offer a unique sustainable model that will boost the national and local economy, improving the wellbeing of communities. Furthermore, the scheme will significantly accelerate the construction process as the 3D printer will produce the entire structure at once.
TECLA was developed using in-depth research undertaken by the SOS - School of Sustainability, a professional school founded by Mario Cucinella that combines education, research and practice. The research, conducted with the support of MA students from the Sustainable Environmental Design programme at the Architectural Association School of Architecture in London, explored the cause and effects of homelessness. It interrogated the use of technological advances to enable a solution, based on case studies in locations with different climates. The result is a highly flexible envelope, designed to be resilient to any climate and energy-efficient in a way that traditional housing models are not. 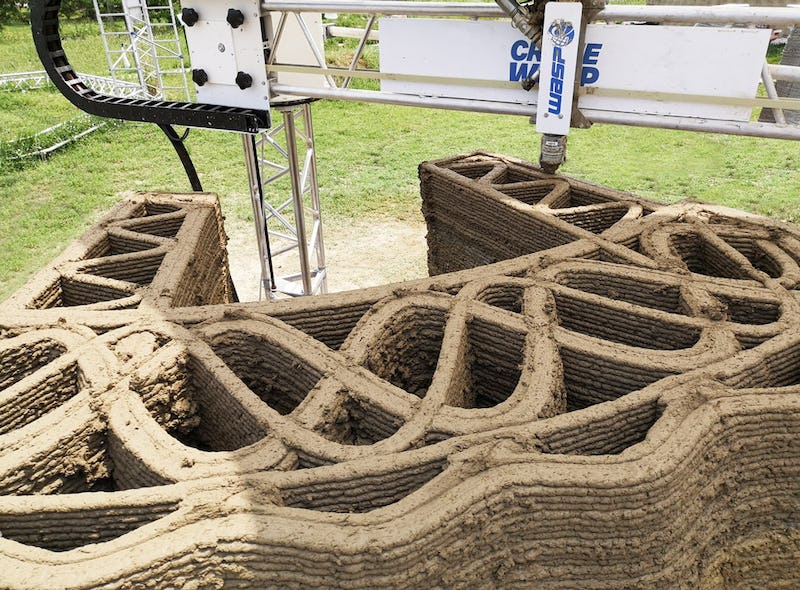 The collaboration between MC A and WASP has been supported by Mapei, a worldwide producer of construction materials, which has studied the clay materials and identified the key components within the raw earth mixture to create the final highly optimised printable product. Structural tests were carried out by Milan Ingegneria, a Milan-based engineering consultancy, which worked on the optimisation of the shape in order to create a self-supporting structure. The frames, customised and highly-efficient, have been engineered and produced by Capoferri, a company specialised in architectural frames and always at the forefront of technological advances, while the landscaping has been curated by Frassinago, a multidsciplinary company that includes a design studio that deals with landscape architecture, and a firm specialized in the gardening and outdoor sector. RiceHouse provided technical consultancy about bio-materials deriving from rice cultivation waste, which affected the thermal performance and living comfort of the building envelope. The lighting project, developed both internally and externally with the aim of achieving the maximum flexibility and sustainability of the intervention, has been developed by Lucifero's.
The model was named TECLA after an imaginary city described by Italo Calvino in The Invisible Cities as a 'continuous urban evolution'. It is representative of both companies' efforts to combine technological innovation with a respect for the environment, and an understanding of natural processes. TECLA received planning approval in May 2019, commenced printing in September 2019, and is due to complete at the beginning of 2020. Starting with the first prototype at WASP headquarters in Massa Lombarda, the project's aim is to work towards communities of smart houses around the world.
Source and images: WASP
Learn more at the next leading event on the topic: 3D Printing & 3D Electronics Europe 2020