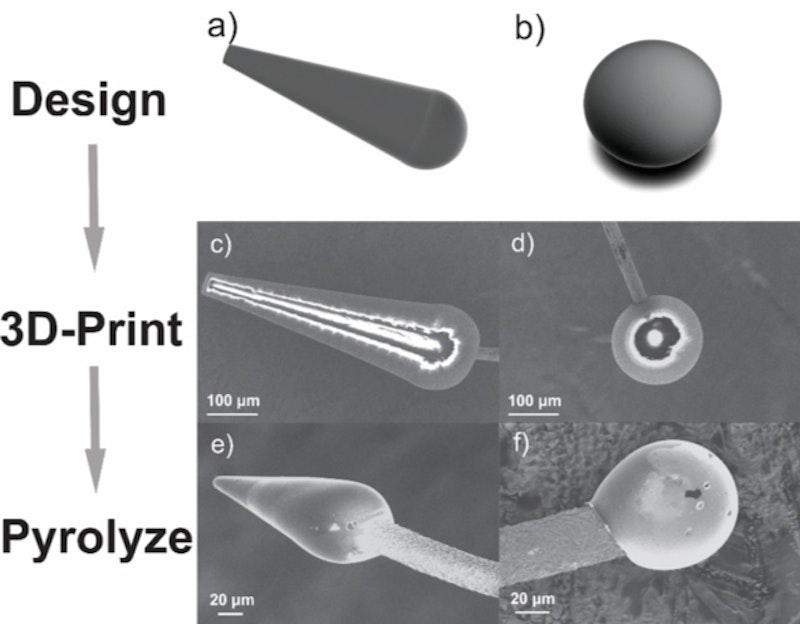 A new 3D-printing method allows manufacturers to better customize carbon microelectrodes used as biomedical implants. These implants are used to record signals from the brain or nervous system. Researchers made implantable probes that were shaped like spheres and cones. Putting these probes in a rat's brain, they were able to successfully monitor how the rat's brain released dopamine. For more information see the IDTechEx report on 3D Printing 2019-2029: Technology and Market Analysis.
Current manufacturing methods for microelectrodes limit the shapes and sizes that companies can produce. These techniques are also not well-suited for large-scale manufacturing. 3D-printing techniques can expand the possibilities for customizable microsensors. They also make it simpler for manufacturers to produce these sensors on a large scale for industry. These methods may be able to help improve biomedical devices for monitoring signals from the brain and nervous system.
Carbon-fiber microelectrodes are widely used in biochemical sensing applications and as implants to measure or stimulate electrical activity in the brain. However, current fabrication methods, done by hand, have limited the design of microsensors to simple geometries and are not easily reproducible for high-volume production. For the first time, researchers used a 3D-printing system to create micro- and nanoelectrode structures with customizable geometries, such as cones or spheres. The 3D-printing technology uses lasers to "write" on light-sensitive materials, which are then treated at high temperatures to produce a carbon electrode with electroactive properties. Sphere and cone geometries with surface features as small as one micrometer, or about five times smaller than a red blood cell, were successfully fabricated and characterized as effective neurochemical detectors. As a proof-of-principle, spherical microelectrodes were implanted in a rat brain and used to detect dopamine release in vivo. The 3D-printed structures demonstrate the superior performance and stability of traditional carbon-fiber microelectrodes and are well-suited to cost-effective batch production methods. The new strategy could open practical avenues for customizable microsensor implants that can be mass produced for diverse neuroscience applications.
Source and top image: US Department of Energy
Learn more at the next leading event on the topic: 3D Printing & 3D Electronics Europe 2020