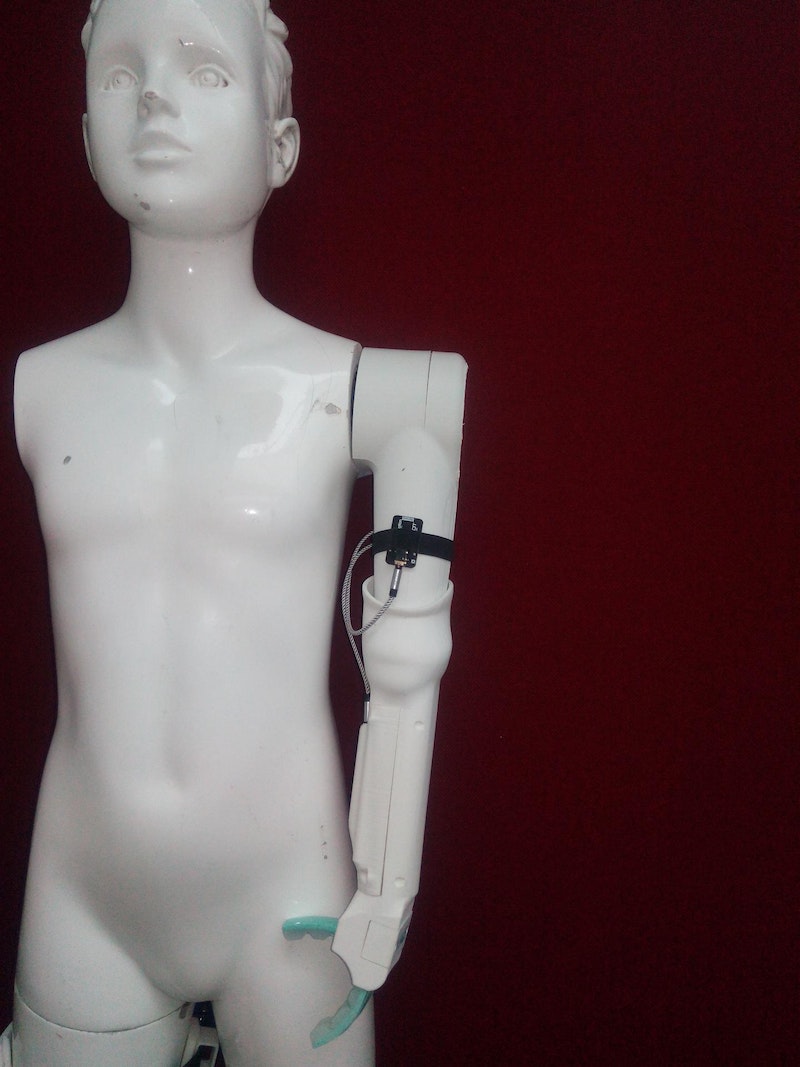 The lightweight device with soft grip fingers uses an armband fitted with sensors to detect electrical signals naturally conducted by muscles. This enables the toddler to grip and pick up objects in much the same way as they would with a natural arm. While muscle-stimulated (or 'myoelectric') prostheses are routinely used by adults, this new smaller device, developed by a team at the University of Lincoln, UK, is the first of its kind to translate the same technology into dimensions suitable for a toddler.
Previously, as well as being expensive to build, producing prosthesis for children under two has been considered problematic as a child's fast growth rates mean that devices would need to be frequently replaced. By using 3D printing, the SIMPA (Soft-Grasp Infant Myoelectric Prosthetic Arm) is cheaper to produce than conventional prosthesis and can be custom made to the individual child's required size without the need for traditional plaster casting techniques. For more information see the IDTechEx report on 3D Printing in the Medical and Dental Industry 2019 - 2029.
Another issue with existing prosthetics for children is the high rejection rates. The early fitting of a functional myoelectric device has been shown to reduce this risk, which is something that would be made possible with the use of the new SIMPA device.
Dr Khaled Goher, Senior Lecturer in the School of Engineering at the University of Lincoln and the lead engineer on the project, said: "Many traditional active prosthetics are unsuitable for toddlers as they are very time consuming to construct and heavy. Our proposed system would utilise a seven-channel paediatric armband with motion sensors allowing infants to benefit from and become familiar with active prosthetics, with evidence showing that the earlier the exposure, the more likely for the prosthetics to be accepted and used throughout life. So far, the device has been tested for grasp force and effectiveness using a range of everyday objects including toys, bottles and building blocks but the next stage of the project is to test the prototype design on toddlers."
Dr Goher added: "We are planning to use algorithm training which would utilise games to engage with the toddlers and attune the system to the 'grab' signals from the armband.''
Source and top image: University of Lincoln
Learn more at the next leading event on the topic: Healthcare Sensor Innovations USA 2020