Printing Tiny, High-Precision Objects in a Matter of Seconds 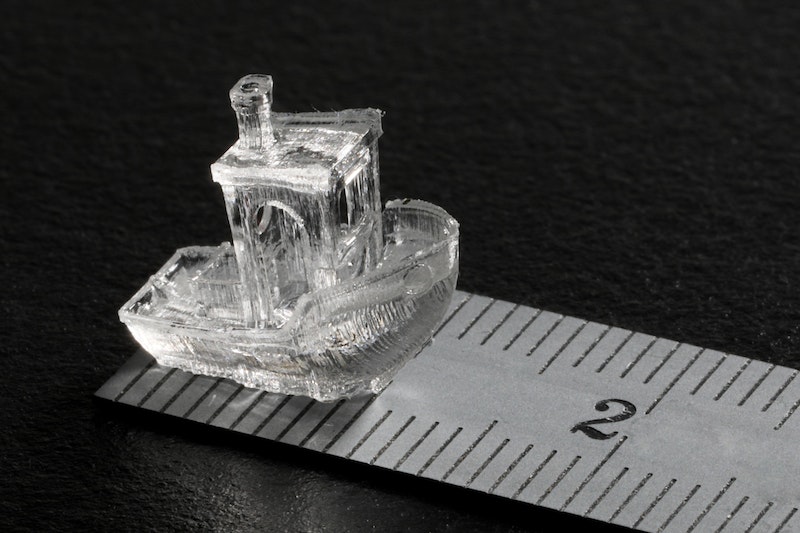 Researchers at EPFL have developed a new, high-precision method for 3D-printing small, soft objects. The process, which takes less than 30 seconds from start to finish, has potential applications in a wide range of fields, including 3D bioprinting. For further information see the IDTechEx report on 3D Bioprinting 2018 - 2028: Technologies, Markets, Forecasts.
It all starts with a translucent liquid. Then, as if by magic, darker spots begin to form in the small, spinning container until, barely half a minute later, the finished product takes shape. This groundbreaking 3D-printing method, developed by researchers at EPFL's Laboratory of Applied Photonics Devices (LAPD), can be used to make tiny objects with unprecedented precision and resolution - all in record time. The team has published its findings in the journal Nature Communications, and a spin-off, Readily3D, has been set up to develop and market the system.
The technology could have innovative applications in a wide range of fields, but its advantages over existing methods - the ability to print solid parts of different textures - make it ideally suited for medicine and biology. The process could be used, for instance, to make soft objects such as tissue, organs, hearing aids and mouthguards.
"Conventional 3D printing techniques, known as additive manufacturing, build parts layer by layer," explains Damien Loterie, the CEO of Readily3D. "The problem is that soft objects made that way quickly fall apart." What's more, the process can be used to make delicate cell-laden scaffolds in which cells can develop in a pressure-free 3D environment. The researchers teamed up with a surgeon to test 3D-printed arteries made using the technique. "The trial results were extremely encouraging," says Loterie.
Hardened by light
The new technique draws on the principles of tomography, a method used mainly in medical imaging to build a model of an object based on surface scans.
The printer works by sending a laser through the translucent gel - either a biological gel or liquid plastic, as required. "It's all about the light," explains Paul Delrot, Readily3D's CTO. "The laser hardens the liquid through a process of polymerization. Depending on what we're building, we use algorithms to calculate exactly where we need to aim the beams, from what angles, and at what dose."
The system is currently capable of making two-centimeter structures with a precision of 80 micrometers, about the same as the diameter of a strand of hair. But as the team develops new devices, they should be able to build much bigger objects, potentially up to 15 centimeters. "The process could also be used to quickly build small silicone or acrylic parts that don't need finishing after printing," says Christophe Moser, who heads the LAPD. Interior design could be a potentially lucrative market for the new printer.
Source: EPFL
Learn more at the next leading event on the topic: 3D Printing & 3D Electronics Europe 2020