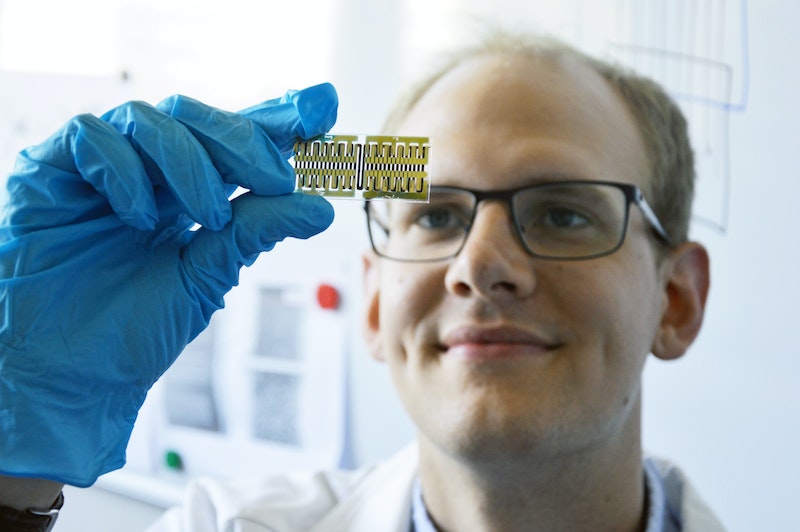 The production of highly sensitive sensors is a complex process: it requires many different steps and the almost dust-free environment of special cleanrooms. A research team from Materials Science at Kiel University (CAU) and from Biomedical Engineering at the Technical University of Moldova has now developed a procedure to produce extremely sensitive and energy-efficient sensors using 3D printing. The simple and cost-effective production method is also suitable for industrial production, the team recently explained in the journal Nano Energy. Their sensor is able to precisely measure the concentration of acetone vapor using a special structuring at nano level. As the acetone concentration in the breath correlates with blood sugar levels, the research team hopes to have made a step towards producing a breath test for diabetics that could replace the daily checking of their blood sugar levels by finger pricks. For more information see the IDTechEx report on 3D Printing in the Medical and Dental Industry 2019 - 2029.
Larger surface makes sensor more sensitive
The special surface of the new sensors is visible under a high-resolution electron microscope: molecules of gases like acetone are particularly easily entangled in a thicket of nanowires around just 20 nanometres in diameter. The nano-wires-spikes increase the size of the sensor surface and so create its high level of sensitivity. "To make this special structure we heat simple microparticles of metal until numerous fine nanowires and nanospikes form on them. With a specially developed ink we can apply these particles with precision to various surfaces using a 3D printer," said Leonard Siebert, explaining what is known as "Direct Ink Writing". As a doctoral researcher in the "Functional Nanomaterials" working group at the CAU, he is researching additive production technologies as 3D printing, among other things.
Multi-faceted procedure for acetone and other gases
Due to their special sensor concept the automatised 3D printing process presented in the study can be performed in normal ambient air. In this way, several sensors are created at the same time within a few minutes, something which used to take a couple of hours in cleanrooms. The starting material can also be varied in a targeted manner, changing the size and structure and enabling the detection of a certain gas. "This is still, first and foremost, basic research, but this principle could be used in the future to develop sensors for hydrogen or other explosive and hazard gases," Professor Rainer Adelung, head of the working group at Kiel University, is convinced.
The metal particles as the starting material for the sensors have to be of a certain size in order to form the special wires and nanospikes. "The correct and high ratio between surface and volume is crucial," explained Dr Oleg Lupan from Biomedical Engineering at the Technical University of Moldova. As a Humboldt fellow, he researched this process for six months as part of the working group in Kiel. What is advantageous for the sensitivity of the sensors proves to be a challenge when it comes to their production: whilst smaller particles can be applied to surfaces easily using established techniques such as spraying or vacuum evaporation systems, the microparticles used here are already too large for this. "For this reason, we considered to use 3D printers to apply the micro-particles," said materials scientist Siebert. "The knowledge of materials and devices of colleagues from the Technical University of Moldova and our experience in nanomaterials and 3D printing complement each other perfectly here."
Energy efficiency enables mobile applications
When organic molecules meet the numerous wires in the finished sensor, they react strongly to one another. By doing so, they change the resistance of the sensor and release clearly measurable signals. In principle, however, only a very small volume of electricity passes through the thin wires. "So our sensors only use very little energy," explained Lupan. "This makes small portable measuring devices conceivable, too, which can be read directly via smartphone, for example."
The researchers hope this could enable future use of the sensors in mobile, portable breath tests for diabetics. Instead of checking their blood sugar levels by finger prick several times a day, diabetics could measure the acetone content of their breath. The metabolic product is created when there is a lack of insulin and is emitted via the breath. The highly sensitive sensors could determine acetone values of under 1 ppm (particles per million air molecules), reported the study, while the breath of people with diabetes type I or II has an acetone content of more than 2 ppm.
Source and top image: Kiel University
Learn more at the next leading event on the topic: Healthcare Sensor Innovations USA 2020