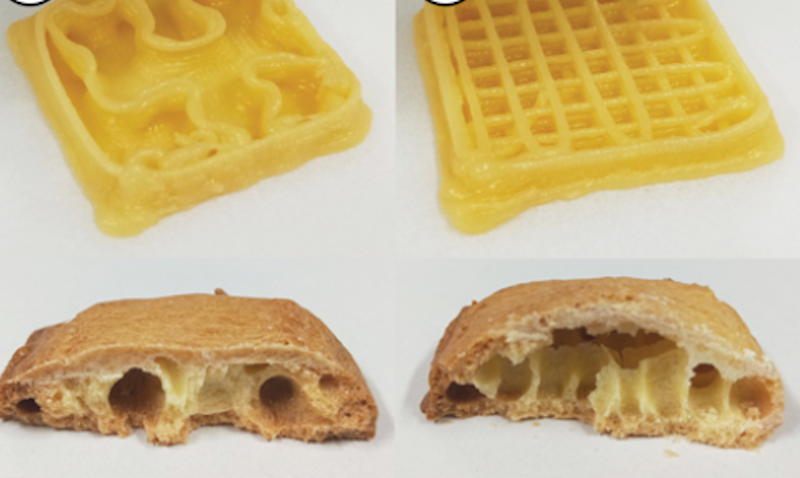 Food 3D printing enables the creation of customized food structures based on a person's individual needs. Researchers have explored the use of food 3D printing to create perceptual illusions for controlling the level of perceived satiety given a defined amount of calories. FoodFab is a system that allows users to control their food intake through modifying a food's internal structure via two 3D printing parameters: infill pattern and infill density. In two experiments with a total of 30 participants, a team from Foodlab studied the effect of these parameters on users' chewing time that is known to affect people's feeling of satiety. Their results show that we can indeed modify the chewing time by varying infill pattern and density, and thus control perceived satiety. Based on the results, the researchers propose two computational models and integrate them into a user interface that simplifies the creation of personalized food structures.
Over the last decades, 3D printers have started to move out of the realm of printing with plastic filament, resins, and metal powders and are now also being used for fabricating objects from edible materials. Today, 3D food printers are already in use in a variety of contexts from high-end restaurants that create new types of recipes to elderly care homes that use food 3D printing to reshape unappealing mashed food into more appealing shapes. 3D food printers are thus quickly becoming part of the ongoing revolution of the future of computing and food, and can make a difference in the way we eat, which is gaining more and more attention in light of global challenges around obesity and other eating related disorders. for further information see the IDTechEx report on 3D Printing 2019-2029: Technology and Market Analysis.
Recently, food perception researches have started to investigate how to change peoples' perception of satiety by modifying different perceptual cues. Visual cues, for instance, play an important role: When a piece of food is cut into strips rather than cubes, people perceive it as more filling since it takes up more volume on the plate. Similarly, haptic cues, such as an increased biting force and the resulting longer chewing time affect people's feeling of satiety. For instance, people consume less food when eating hard food compared to soft food. Other features of food and food presentation, such as plate size and lighting, have been studied in cross-modal correspondence research, further extending our understanding of perceptual cues and illusions related to food intake.
To evaluate the effect of infill, researchers set up a food 3D printer and fabricated pieces of food with varying infill patterns and infill densities and tested these in two independent experiments with a total of 30 participants, in which each participant's chewing time was measured using an electromyography sensor (EMS) and the perceived level of satiety measured using a self-report questionnaire. The results from both experiments show that changes in infill have a significant effect on chewing time and resulting perceived satiety.
Building on the data from the experiments, the researchers developed two computational models, one for each 3D printing parameter (i.e., infill pattern and infill density). The models output the value of the printing parameter based on a person's desired increase in satiety. These computational models are then used to build an end-to-end system, called FoodFab, which simplifies the process of creating customized food structures (Figure 1). 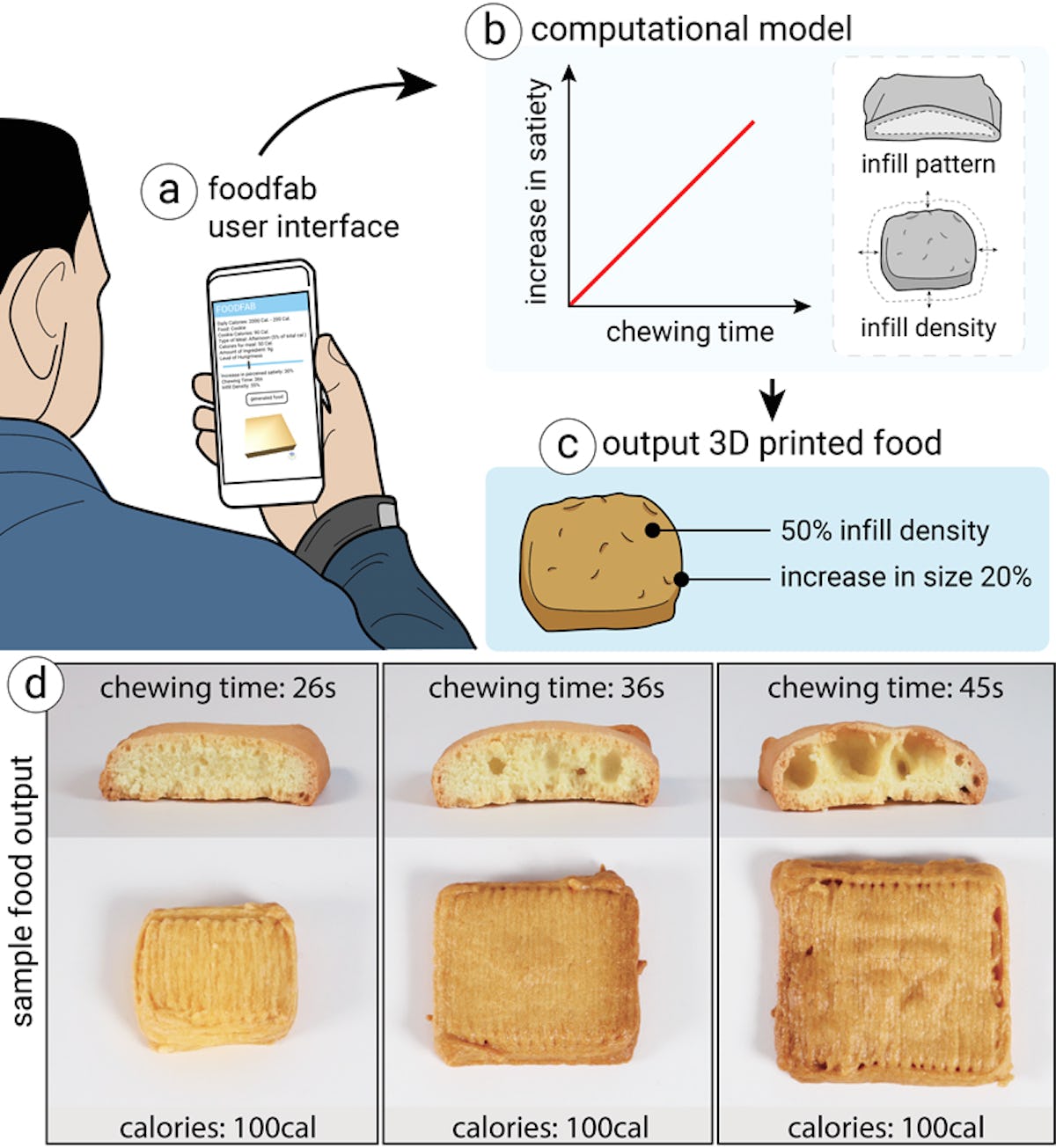 While food 3D printing is still a new research topic, the extended interest in food computing and a first deployment and use of food 3D printers in restaurants point towards a future in which people will make use of such personalized automated meals.:
Source and images: MIT CSAIL HCI Engineering Group