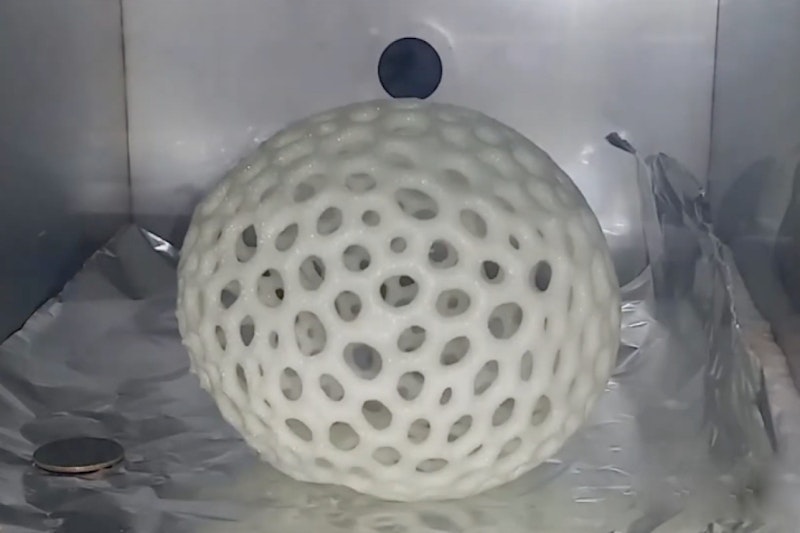 It's a frustrating limitation of 3D printing: Printed objects must be smaller than the machine making them. Huge machines are impractical for printing large parts because they take up too much space and require excessive time to print. Now, a new material reported in ACS Applied Materials & Interfaces can be used to 3D print small objects that expand upon heating. The foam could find applications in architecture, aerospace and biomedicine. For further information see the IDTechEx report on 3D Printing Materials 2019-2029: Technology and Market Analysis.
One type of 3D printing, stereolithography, creates objects by exposing sequential layers of light-sensitive resins to patterns of light, which cure the polymer into the desired shape. Large objects can be created with specialized stereolithography machines, but they are usually made by fastening smaller 3D-printed components together. David Wirth, Jonathan Pokorski and colleagues at the University of California, San Diego wanted to develop an expandable resin that could be used to print large objects with an inexpensive, commercially available 3D printer.
The researchers tested many different resin formulations to find one that allowed them to print an object that, when exposed to heat, expanded to a larger size. They used the formulation to 3D print a hollow, latticed sphere. Heating the sphere in an oven caused a volatile component of the resin to bubble out as a gas. This created a porous, polystyrene foam-like material that was up to 40 times larger in volume than the original printed object. With this method, the team also 3D printed many other shapes, including a boat, which could carry about 20 times more weight at its expanded size, and a wind turbine that could produce a small amount of electricity at its larger size. Although the new material isn't as strong as polystyrene foam, it could someday be used for cushioning, airfoils, buoyancy aids or even expandable habitats for astronauts, the researchers say.
Source and top image: American Chemical Society