Leveraging a 3D Printer Defect to Create a New Quasi-Texile 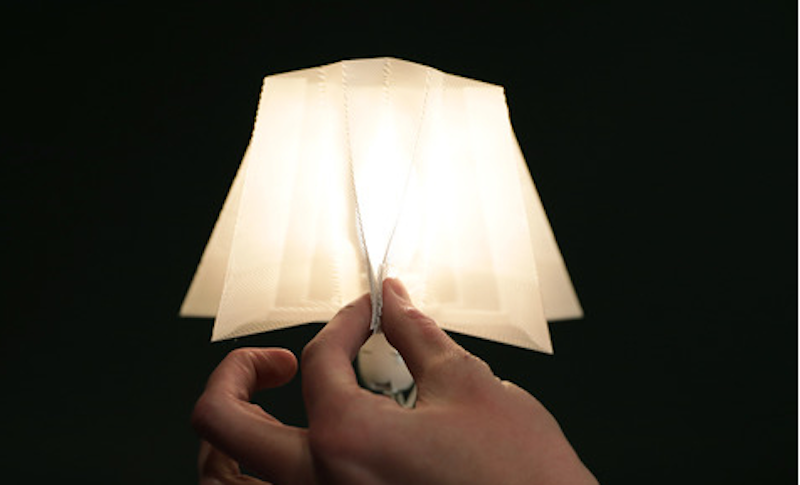 Sometimes 3D printers mess up. They extrude too much material, or too little, or deposit material in the wrong spot. But what if this bug could be turned into a (fashionable) feature? Introducing DefeXtiles, a tulle-like textile that MIT Media Lab graduate student Jack Forman developed by controlling a common 3D printing defect — the under-extrusion of polymer filament.
Forman used a standard, inexpensive 3D printer to produce sheets and complex 3D geometries with a woven-like structure based on the "glob-stretch" pattern produced by under-extrusion. Forman has printed these flexible and thin sheets into an interactive lampshade, full-sized skirts, a roll of fabric long enough to stretch across a baseball diamond, and intricately patterned lace, among other items. The material may prove immediately useful for prototyping and customizing in fashion design, Forman says, but future applications also could include 3D-printed surgical mesh with tunable mechanical properties, among other items. For further information see the IDTechEx report on 3D Printed Materials Market 2020-2030: COVID Edition.
"In general, what excites me most about this work is how immediately useful it can be to many makers," Forman says. "Unlike previous work, the fact that no custom software or hardware is needed — just a relatively cheap $250 printer, the most common type of printer used — really makes this technique accessible to millions of people."
"We envision that the materials of the future will be dynamic and computational," says Ishii. "We call it 'Radical Atoms.' DefeXtiles is an excellent example of Radical Atoms, a programmable matter that emulates the properties of existing materials and goes beyond. We can touch, feel, wear, and print them."
Filaments to fabric
Forman had been experimenting with 3D printing during the media arts and sciences class. Forman's experiments were inspired by the work of a friend from his undergraduate days at Carnegie Mellon University, who used under-extruded filament to produce vases. With his first attempts at under-extruding, "I was annoyed because the defects produced were perfect and periodic," he says, "but then when I started playing with it, bending it and even stretching it, I was like, 'whoa, wait, this is a textile. It looks like it, feels likes it, bends like it, and it prints really quickly."
When a 3D printer under-extrudes material, it produces periodic gaps in the deposited material. Using an inexpensive fused deposition modeling 3D printer, Forman developed an under-extruding process called "glob-stretch," where globs of thermoplastic polymer are connected by fine strands. The process produces a flexible, stretchy textile with an apparent warp and weft like a woven fabric. Forman says it feels something like a mesh jersey fabric.
"Not only are these textiles thinner and faster to print than other approaches, but the complexity of demonstrated forms is also improved. With this approach we can print 3D dimensional shell forms with a normal 3D printer and no special slicer software," says Forman. "This is exciting because there's a lot of opportunities with 3D printing fabric, but it's really hard for it to be easily disseminated, since a lot of it uses expensive machinery and special software or special commands that are generally specific to a printer."
The new textile can be sewn, de-pleated, and heat-bonded like an iron-on patch. Forman and his colleagues have printed the textiles using many common 3D printing materials, including a conductive filament that they used to produce a lamp that can be lit and dimmed by touching pleats in the lampshade. The researchers suggest that other base materials or additives could produce textiles with magnetic or optical properties, or textiles that are more biodegradable by using algae, coffee grounds, or wood.
According to Scott Hudson, a professor at Carnegie Mellon University's Human-Computer Interaction Institute, Forman's work represents a very interesting addition to the expanding set of 3D-printing techniques. "This work is particularly important because it functions within the same print process as more conventional techniques," notes Hudson, who was not part of the study. "This will allow us to integrate custom 3D-printed textile components — components that can be flexible and soft — into objects, along with more conventional hard parts."
One of the more unusual aspects of the project has been what to call the material. Forman and his colleagues use the term "quasi-textile" because DefeXtiles doesn't have all the same physical qualities of a usual textile, such as a bias in both directions and degree of softness. But some skeptics have been converted when they feel the material, Forman says.
Source and top image: MIT