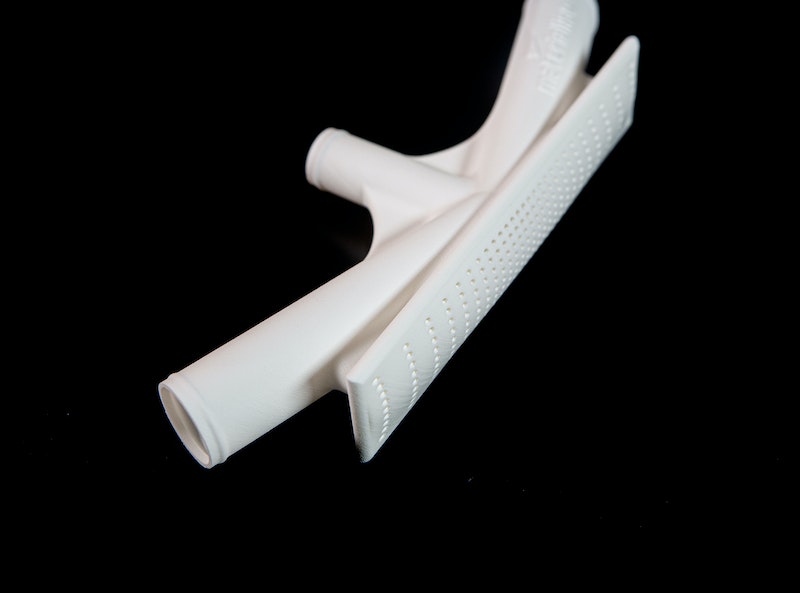 Materialise NV  announces  Bluesint PA12, a material innovation that makes it possible to 3D print with up to 100% re-used powder. 3D printing is often considered a sustainable manufacturing technology but a new Lifecycle Analysis indicates that for large series of identical products, 3D printing has a bigger environmental impact compared to a conventional production technology. With the announcement of Bluesint PA12, Materialise creates a path towards eliminating waste in 3D printing.
"Many people view 3D printing as a positive force that helps companies to operate more sustainably," says Fried Vancraen, CEO of Materialise. "However, that's simply not enough. As we enter the fourth decade of 3D printing, the question is not whether 3D printing is a sustainable manufacturing technology. The question becomes: what can we do to make 3D printing more sustainable?"
With Laser Sintering, the second most commonly used 3D printing technology, up to 50% of the powder becomes waste. The potential to recycle used powder is limited and 3D printing with only used powder creates surface problems that make the 3D printed object unsuitable for most applications. Now, Materialise announces Bluesint PA12, a manufacturing innovation that makes it possible to print with up to 100% re-used powder, drastically increasing the resource efficiency of Laser Sintering. For further information see the IDTechEx report on 3D Printed Materials Market 2020-2030: COVID Edition.
With Bluesint PA12, powder that would normally be wasted can be given a second life to make new parts. Parts printed with Bluesint PA12 have similar mechanical properties, allowing users to make a choice not only based on technical specifications but also on the environmental impact.
"With Bluesint PA12 we are able to significantly reduce powder waste," says Jurgen Laudus, VP and General Manager of Materialise Manufacturing. "Bluesint PA12 represents a major step towards making 3D printing more sustainable and is an example of how we empower our customers to make a choice for sustainability."
Addressing the "orange peel" effect
The search for a more sustainable 3D printing process started seven years ago in the Materialise research lab in Leuven, Belgium. The problem with Laser Sintering is that 3D printing with only used powder - residual powder from a previous 3D print process - creates a surface texture problem called the "orange peel" effect, which makes the printed object largely unusable. The orange peel effect is caused by shrinking that occurs when the powder cools down between two consecutive sintering processes. The existing solution is to mix used powder with fresh powder, which is clearly not sustainable.
By using a 3D printer with multiple lasers, Materialise engineers were able use one laser for sintering the powder and a second laser to keep the powder above a certain temperature threshold. By preventing the powder from cooling down between two layers, they prevented the shrinking process that causes the orange peel effect. The result is a printed object with similar mechanical and visual properties but printed with 100% recycled powder, drastically reducing waste.
Over the course of 2021, Materialise plans to have several Laser Sintering machines running Bluesint PA12. In the start-up phase alone the company aims to re-use more than five tons of material that would normally become waste.
In the past three decades, 3D Printing has established itself as a powerful and sustainable manufacturing solution, empowering people through local, decentralized production; improving people's health and well-being through personalized care, and providing a manufacturing process with less waste through mass-personalization and optimized distribution. As a result, many view 3D printing as a positive force to help companies operate more sustainably. A survey by Materialise indicates that 76% of Chinese manufacturers found that 3D printing is a more sustainable way to manufacture products when compared to conventional manufacturing technologies.
BASF and Materialise recently conducted a Lifecycle Analysis (LCA) for the production of one million pairs of midsoles, assessing the environmental impact in all stages of the product life. In this case, they compared the environmental impact of three 3D printing technologies with a conventional manufacturing technology: conventional polyurethane casting. The LCA indicates that for large series of identical products, 3D printing is currently not the most sustainable choice and has a bigger impact on climate change and the depletion of fossil fuels compared to the conventional manufacturing technology.
While this analysis looked at large series of identical products, 3D printing typically offers advantages for the production of smaller or customized series that can be produced locally. This helps to balance the environmental impact in favor of 3D Printing. However, it remains crucial that the 3D printing industry continues to invest in technologies to make the 3D printing process more sustainable.
Follow 3D Printing Progress to keep in touch with 3D Printing news.
Source and top image: Materialise NV