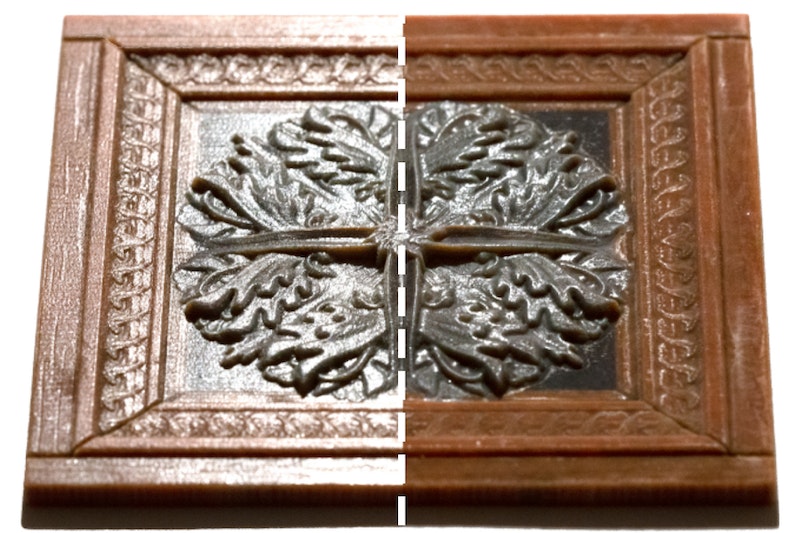 New system enables realistic variations in glossiness across a 3D-printed surface. The advance could aid fine art reproduction and the design of prosthetics.
Shape, color, and gloss. Those are an object's three most salient visual features. Currently, 3D printers can reproduce shape and color reasonably well. Gloss, however, remains a challenge. That's because 3D printing hardware isn't designed to deal with the different viscosities of the varnishes that lend surfaces a glossy or matte look. For further information see the IDTechEx report on 3D Printing and Additive Manufacturing 2020-2030: COVID Edition.
MIT researcher Michael Foshey and his colleagues may have a solution. They've developed a combined hardware and software printing system that uses off-the-shelf varnishes to finish objects with realistic, spatially varying gloss patterns. Foshey calls the advance "a chapter in the book of how to do high-fidelity appearance reproduction using a 3D printer."
He envisions a range of applications for the technology. It might be used to faithfully reproduce fine art, allowing near-flawless replicas to be distributed to museums without access to originals. It might also help create more realistic-looking prosthetics. Foshey hopes the advance represents a step toward visually perfect 3D printing,"where you could almost not tell the difference between the object and the reproduction."
Foshey, a mechanical engineer in the MIT Computer Science and Artificial Intelligence Laboratory (CSAIL), will present the paper at next month's SIGGRAPH Asia conference, along with lead author Michal Piovarči of the University of Lugano in Switzerland. Co-authors include MIT's Wojciech Matusik, Vahid Babaei of the Max Planck Institute, Szymon Rusinkiewicz of Princeton University, and Piotr Didyk of the University of Lugano.
Glossiness is simply a measure of how much light is reflected from a surface. A high gloss surface is reflective, like a mirror. A low gloss, or matte, surface is unreflective, like concrete. Varnishes that lend a glossy finish tend to be less viscous and to dry into a smooth surface. Varnishes that lend a matte finish are more viscous — closer to honey than water. They contain large polymers that, when dried, protrude randomly from the surface and absorb light. "You have a bunch of these particles popping out of the surface, which gives you that roughness," says Foshey.
But those polymers pose a dilemma for 3D printers, whose skinny fluid channels and nozzles aren't built for honey. "They're very small, and they can get clogged easily," says Foshey.
The state-of-the-art way to reproduce a surface with spatially varying gloss is labor-intensive: The object is initially printed with high gloss and with support structures covering the spots where a matte finish is ultimately desired. Then the support material is removed to lend roughness to the final surface. "There's no way of instructing the printer to produce a matte finish in one area, or a glossy finish in another," says Foshey. So, his team devised one.
They designed a printer with large nozzles and the ability to deposit varnish droplets of varying sizes. The varnish is stored in the printer's pressurized reservoir, and a needle valve opens and closes to release varnish droplets onto the printing surface. A variety of droplet sizes is achieved by controlling factors like the reservoir pressure and the speed of the needle valve's movements. The more varnish released, the larger the droplet deposited. The same goes for the speed of the droplet's release. "The faster it goes, the more it spreads out once it impacts the surface," says Foshey. "So we essentially vary all these parameters to get the droplet size we want."
The printer achieves spatially varying gloss through halftoning. In this technique, discrete varnish droplets are arranged in patterns that, when viewed from a distance, appear like a continuous surface. "Our eyes actually do the mixing itself," says Foshey. The printer uses just three off-the-shelf varnishes — one glossy, one matte, and one in between. By incorporating these varnishes into its preprogrammed halftoning pattern, the printer can yield continuous, spatially varying shades of glossiness across the printing surface.
Along with the hardware, Foshey's team produced a software pipeline to control the printer's output. First, the user indicates their desired gloss pattern on the surface to be printed. Next, the printer runs a calibration, trying various halftoning patterns of the three supplied varnishes. Based on the reflectance of those calibration patterns, the printer determines the proper halftoning pattern to use on the final print job to achieve the best possible reproduction. The researchers demonstrated their results on a variety of "2.5D" objects — mostly-flat printouts with textures that varied by half a centimeter in height. "They were impressive," says Foshey. "They definitely have more of a feel of what you're actually trying to reproduce."
The team plans to continue developing the hardware for use on fully-3D objects. Didyk says "the system is designed in such a way that the future integration with commercial 3D printers is possible."
This work was supported by the National Science Foundation and the European Research council.
Source and top image: MIT