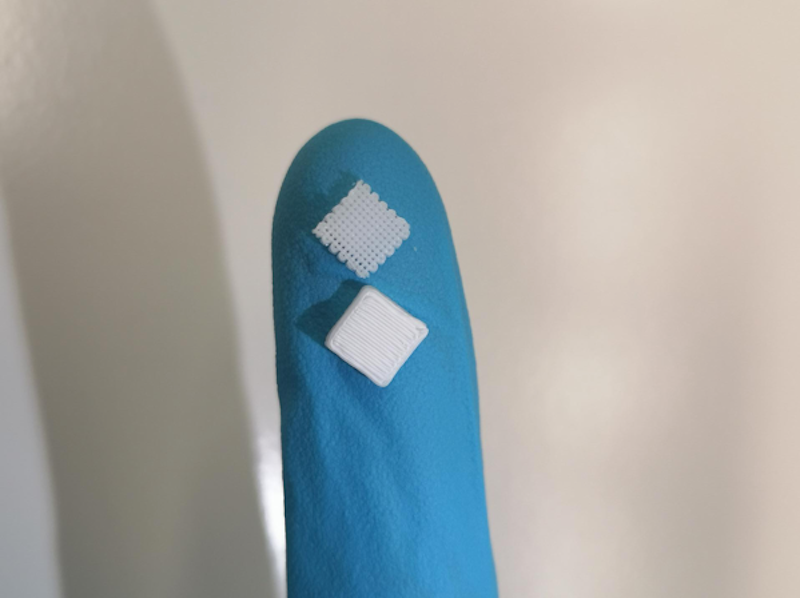 Chemists at Martin Luther University Halle-Wittenberg (MLU) have developed a way to integrate liquids directly into materials during the 3D printing process. This allows, for example, active medical agents to be incorporated into pharmaceutical products or luminous liquids to be integrated into materials, which allow monitoring of damage. The study was published in "Advanced Materials Technologies".
3D printing is now widely used for a range of applications. Generally, however, the method is limited to materials which are liquefied through heat and become solid after printing. If the finished product is to contain liquid components, these are usually added afterwards. This is time-consuming and costly. "The future lies in more complex methods that combine several production steps," says Professor Wolfgang Binder from the Institute of Chemistry at MLU. "That is why we were looking for a way to integrate liquids directly into the material during the printing process."
To this endeavour, Binder and his colleague Harald Rupp combined common 3D printing processes with traditional printing methods such as those used in inkjet or laser printers. Liquids are added drop by drop at the desired location during the extrusion of the basic material. This allows them to be integrated directly and into the material in a targeted manner. For further information see the IDTechEx report on 3D Printed Materials Market 2020-2030: COVID Edition.
The chemists have been able to show that their method works through two examples. First, they integrated an active liquid substance into a biodegradable material. "We were able to prove that the active ingredient was not affected by the printing process and remained active," explains Binder. In the pharmaceutical industry, such materials are used as drug depots which can be slowly broken down by the body. They can be used after operations, for example, to prevent inflammation. This new process could facilitate their production.
Secondly, the scientists integrated a luminous liquid into a plastic material. When the material becomes damaged, the liquid leaks out and indicates where the damage has occurred. "You could imprint something like this into a small part of a product that is exposed to particularly high levels of stress," says Binder. For example, in parts of cars or aircraft that are under a lot of strain. According to Binder, damage to plastic materials has so far been difficult to detect - unlike damage to metals, where X-rays can expose micro-cracks. The new approach could therefore increase safety.
The combined process is also conceivable for many other areas of application, says the chemist. The team soon plans to use the method to print parts of batteries. "Larger quantities cannot be produced in the laboratory with our setup," Binder explains. In order to produce industrial quantities, the process must be further developed outside the university.
Source and top image: Martin-Luther-Universitat Halle-Wittenberg