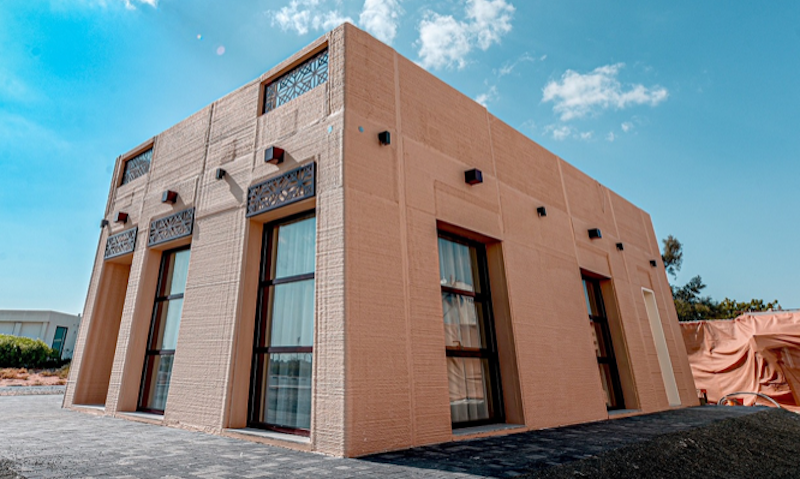 The first 3D-printed fully-functional villa in the Middle East was built at the Sharjah Research, Technology and Innovation Park (SRTI Park), with the design following traditional architecture but constructed using 3D-printing techniques.
SRTI Park CEO Hussain Al Mahmoudi said the villa was finished in just two weeks, and it involved a large research programme between different universities, especially the American University of Sharjah, in collaboration with the private sector and some international universities in Finland and research institutions in the Netherlands as well as other countries. He said "We aspire, through this project, to strengthen the emirate's position as a centre for research and innovation in the world." For further information see the IDTechEx report on 3D Printing and Additive Manufacturing 2020-2030: COVID Edition.
The house was constructed by technology provider CyBe Construction, a leading Dutch 3D printing company. CyBe Construction used a 3D printer that can print up to speeds of 600 mm/s, with fast drying concrete mortar that can create load bearing structures in under an hour. CyBe said the printer has a variety of applications, including formworks, walls, sewer pits, abutments and floors. The mobile concrete 3D printer has rubber wheel tracks and was able to roam freely around the site.
Al Mahmoudi noted: "This type of construction has many advantages such as easy access to complex designs and simple modification with access to parts of different sizes, which resulted in shorter duration of construction and lots of savings."
Source: Sharjah Research Technology and Innovation Park, Sharjah24
Top image: Sharjah24