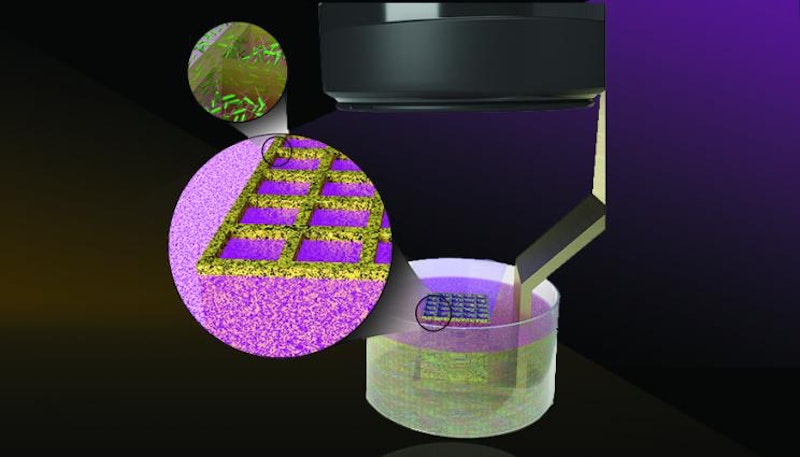 Lawrence Livermore National Laboratory (LLNL) scientists have developed a new method for 3D printing living microbes in controlled patterns, expanding the potential for using engineered bacteria to recover rare-earth metals, clean wastewater, detect uranium and more.
Through a novel technique that uses light and bacteria-infused resin to produce 3D-patterned microbes, the research team successfully printed artificial biofilms resembling the thin layers of microbial communities prevalent in the real world. The research team suspended the bacteria in photosensitive bioresins and "trapped" the microbes in 3D structures using LED light from the LLNL-developed Stereolithographic Apparatus for Microbial Bioprinting (SLAM) 3D printer. The projection stereolithography machine can print at high resolution on the order of 18 microns — nearly as thin as the diameter of a human cell. In the paper, which appears online in the journal Nano Letters, researchers proved the technology can be used effectively to design structurally defined microbial communities. They demonstrated the applicability of such 3D-printed biofilms for uranium biosensing and rare-earth biomining applications and showed how geometry influences the performance of the printed materials. For further information see the IDTechEx report on 3D Printed Materials Market 2020-2030: COVID Edition.
"We are trying to push the edge of 3D microbial culturing technology," said principal investigator and LLNL bioengineer William "Rick" Hynes. "We think it's a very under-investigated space and its importance is not well understood yet. We're working to develop tools and techniques that researchers can use to better investigate how microbes behave in geometrically complex, yet highly controlled conditions. By accessing and enhancing applied approaches with greater control over the 3D structure of the microbial populations, we will be able to directly influence how they interact with each other and improve system performance within a biomanufacturing production process."
While seemingly simple, Hynes explained that microbial behaviors are actually extremely complex, and are driven by spatiotemporal characteristics of their environment, including the geometric organization of microbial community members. How microbes are organized can affect a range of behaviors, such as how and when they grow, what they eat, how they cooperate, how they defend themselves from competitors and what molecules they produce, Hynes said.
Previous methods for producing biofilms in the laboratory have provided scientists with little control over microbial organization within the film, limiting the ability to fully understand the complex interactions seen in bacterial communities in the natural world, Hynes explained. The ability to bioprint microbes in 3D will allow LLNL scientists to better observe how bacteria function in their natural habitat, and investigate technologies such as microbial electrosynthesis, in which "electron-eating" bacteria (electrotrophs) convert surplus electricity during off-peak hours to produce biofuels and biochemicals.
Currently, microbial electrosynthesis is limited because interfacing between electrodes (usually wires or 2D surfaces) and bacteria is inefficient, Hynes added. By 3D printing microbes in devices combined with conductive materials, engineers should achieve a highly conductive biomaterial with a greatly expanded and enhanced electrode-microbe interface, resulting in much more efficient electrosynthesis systems.
Biofilms are of increasing interest to industry, where they are used to remediate hydrocarbons, recover critical metals, remove barnacles from ships and as biosensors for a variety of natural and man-made chemicals. Building on synthetic biology capabilities at LLNL, where bacterium Caulobacter crescentus was genetically modified to extract rare-earth metals and detect uranium deposits, LLNL researchers explored the effect of bioprinting geometry on microbial function in the latest paper.
In one set of experiments, researchers compared the recovery of rare-earth metals in different bioprinted patterns and showed that cells printed in a 3D grid can absorb the metal ions much more rapidly than in conventional bulk hydrogels. The team also printed living uranium sensors, observing increased florescence in the engineered bacteria when compared to control prints.
"The development of these effective biomaterials with enhanced microbial functions and mass transport properties has important implications for many bio-applications," said co-author and LLNL microbiologist Yongqin Jiao. "The novel bioprinting platform not only improves system performance and scalability with optimized geometry, but maintains cell viability and enables long-term storage."
LLNL researchers are continuing to work on developing more complex 3D lattices and creating new bioresins with better printing and biological performance. They are evaluating conductive materials such as carbon nanotubes and hydrogels to transport electrons and feed-bioprinted electrotrophic bacteria to enhance production efficiency in microbial electrosynthesis applications. The team also is determining how to best optimize bioprinted electrode geometry for maximizing mass transport of nutrients and products through the system.
"We are only just beginning to understand how structure governs microbial behavior and this technology is a step in that direction," said LLNL bioengineer and co-author Monica Moya. "Manipulating both the microbes and their physiochemical environment to enable more sophisticated function has a range of applications that include biomanufacturing, remediation, biosensing/detection and even development of engineered living materials — materials that are autonomously patterned and can self-repair or sense/respond to their environment."
Source and top image: Lawrence Livermore National Laboratory