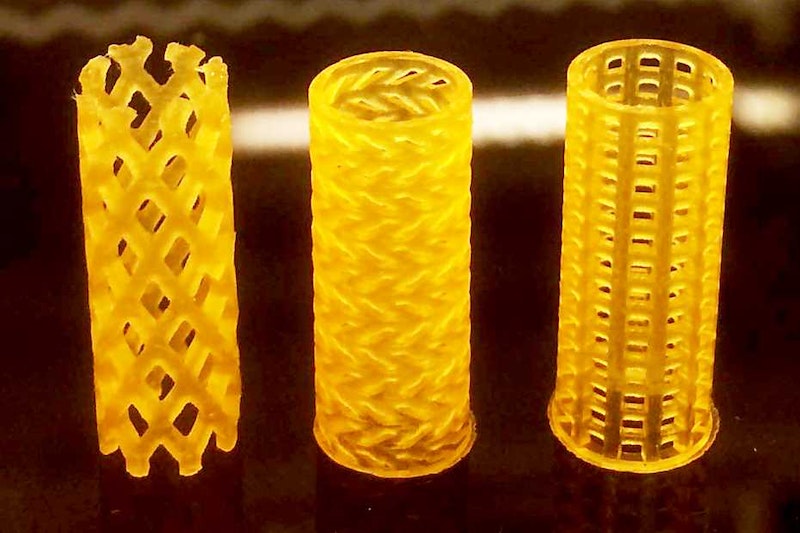 An ETH Zurich research team is using 3D printing to produce a new type of bioresorbable airway stent. This could greatly simplify the future treatment of upper airway obstruction.
Narrowing of the trachea or the main bronchi due to injury or illness can end very badly. If patients get too little oxygen, they risk suffocating and often need medical help as quickly as possible. Surgeons insert stents made of medically usable silicone or metal as a way of treating these patients. Although they quickly bring relief, the implants also have disadvantages: Metal stents have to be removed surgically with some effort, which is a burden for the patients, while silicone stents often migrate away from the insertion site. The reason for this is that the implants are not adapted to a patient's anatomy. For further information see the IDTechEx report on 3D Bioprinting 2018 - 2028: Technologies, Markets, Forecasts.
An ETH Zurich research team, composed of members of the Complex Materials and Drug Formulation and Delivery groups, has now developed an airway stent together with researchers from the University Hospital Zurich and the University of Zurich; it is tailored to patients and bioresorbable, (i.e., it gradually dissolves after implantation). These stents are manufactured using a 3D printing process known as digital light processing (DLP) and light-​sensitive resins specially adapted for this purpose.
First, the researchers create a computer tomography image of a specific section of the airways. Based on this, they develop a digital 3D model of the stent. The data is then transferred on to the DLP printer, which produces the customised stent layer by layer. In the DLP process, a building platform is immersed in a reservoir full of resin. The platform is then exposed to UV light at the desired locations according to the digital model. Where light hits the resin, it hardens. The platform is lowered a little and the next layer is exposed to the light. In this way, the desired object is created layer by layer.
Special resin developed
Until now, DLP technology could only produce stiff and brittle objects using biodegradable materials. The ETH researchers, therefore, developed a special resin that becomes elastic after light exposure. This resin is based on two different macromonomers. The material properties of the object produced with it can be controlled by the length (molecular weight) of the macromonomers used and by their mixing ratio, as the researchers show in their latest study in Science Advances. As soon as UV light hits the resin, the monomers link together and form a polymer network. Since the newly developed resin is too viscous at room temperature, the researchers had to process it at temperatures of 70 to 90 degrees Celsius.
The researchers produced several resins with different monomers and tested the prototypes they made from them to see whether the material is cell-​compatible and biodegradable. They also tested the prototypes for elasticity and for mechanical stress such as compression and tension. Finally, the scientists used the material with the desired properties to make stents, which were tested on rabbits.
Inserting the stents also required a special instrument, as the 3D-​printed objects have to be delivered folded. The implants cannot be kinked or squeezed in the wrong direction and they have to unfold perfectly at their site of deployment. The researchers included gold in the stent's structure in order to facilitate the use of medical imaging to track its location during insertion. This makes the stent more robust, but does not change its tolerability.
Successful tests, good prospects
The tests on the rabbits conducted by the research group of Daniel Franzen, Senior Physician at the Department of Pneumology at the University Hospital Zurich, and the Vetsuisse faculty were successful. The researchers were able to show that the implants are biocompatible and that they are absorbed by the body after six to seven weeks. Ten weeks after implantation, the stent was no longer visible on X-​ray images. In addition, the inserted stents generally did not move from their insertion site.
"This promising development opens up prospects for the rapid production of customised medical implants and devices that need to be very precise, elastic and degradable in the body," says Jean-​Christophe Leroux, Professor of Drug Formulation and Delivery at ETH Zurich. Further research will focus on making the insertion of the stents as gentle as possible.
Furthermore, the processes are to be designed in such a way that production is possible at the point of use, or at least would involve short supply chains. The process is still on a laboratory scale. "However, producing such stents on a large scale is a complex undertaking that we still need to study better," says André Studart, head of the Complex Materials Group at ETH. However, he says the technique can be transferred relatively easily to similar medical applications. "It is hopefully only a matter of time before our solution finds its way into the clinic," says the professor.
Source and top image: ETH Zurich