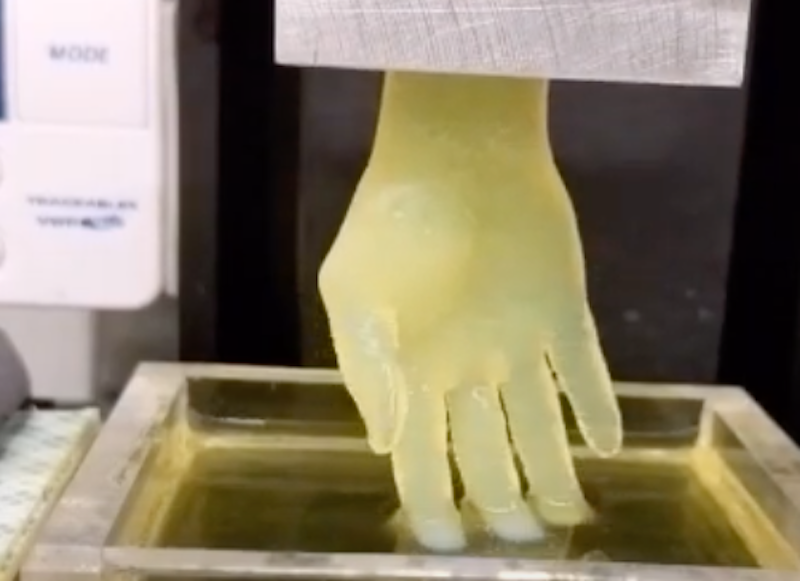 It looks like science fiction: A machine dips into a shallow vat of translucent yellow goo and pulls out what becomes a life-sized hand. But the seven-second video, which is sped-up from 19 minutes, is real.
The hand, which would take six hours to create using conventional 3D printing methods, demonstrates what University at Buffalo engineers say is progress toward 3D-printed human tissue and organs — biotechnology that could eventually save countless lives lost due to the shortage of donor organs.
"The technology we've developed is 10-50 times faster than the industry standard, and it works with large sample sizes that have been very difficult to achieve previously," says the study's co-lead author Ruogang Zhao, PhD, associate professor of biomedical engineering. The work is described in a study published in the journal Advanced Healthcare Materials. It centers on a 3D printing method called stereolithography and jelly-like materials known as hydrogels, which are used to create, among things, diapers, contact lenses and scaffolds in tissue engineering. For further information see the IDTechEx report on 3D Bioprinting 2018 - 2028: Technologies, Markets, Forecasts.
The latter application is particularly useful in 3D printing, and it's something the research team spent a major part of its effort optimizing to achieve its incredibly fast and accurate 3D printing technique.
"Our method allows for the rapid printing of centimeter-sized hydrogel models. It signiﬁcantly reduces part deformation and cellular injuries caused by the prolonged exposure to the environmental stresses you commonly see in conventional 3D printing methods," says the study's other co-lead author, Chi Zhou, PhD, associate professor of industrial and systems engineering. Researchers say the method is particularly suitable for printing cells with embedded blood vessel networks, a nascent technology expected to be a central part of the production of 3D-printed human tissue and organs.
The work was supported with funding from the National Institute of Biomedical Imaging and Bioengineering of the National Institutes of Health. The UB School of Engineering and Applied Sciences and the Jacobs School of Medicine and Biomedical Sciences provided additional funding.
Source and top image: University at Buffalo