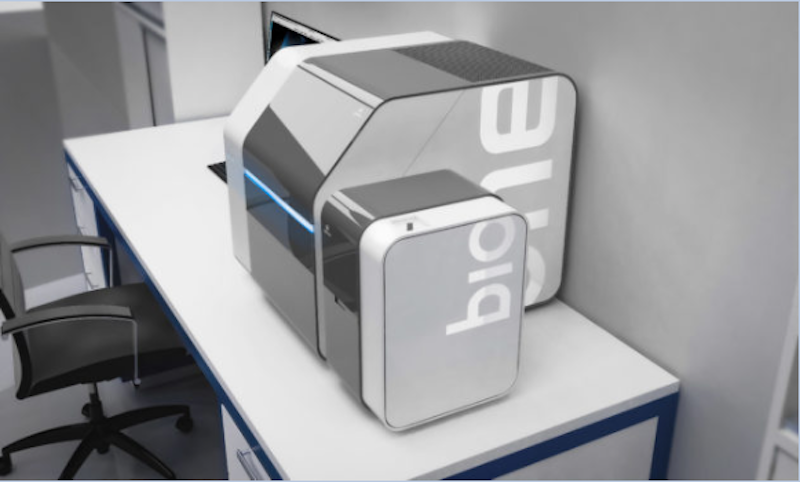 The combination of a 2-Photon 3D-printer with an innovative hydrogel-based bioink allows the direct printing of 3D structures containing living cells at both the meso- and microscale. Developed by UpNano GmbH (Vienna, Austria), the NanoOne Bio is a printer based on the successful NanoOne range of laser-powered 2-Photon 3D-printers that are able to build structures across 12 orders of magnitude. The new hydrogel has been developed with Xpect INX (Ghent, Belgium), a spin-off in foundation specialized in the development of biocompatible materials for the 3D-(bio-)printing industry. It is the only commercially available resin that allows embedding living cells straight from a culture plate within highly precise 3D-printed structures for biological applications.
Two-dimensional cell cultures have been the standard in pharmaceutical preclinical R&D and in biomedical research in general, for many decades. However, growing evidence demonstrates that these models poorly represent the cellular interaction at the 3D level in living systems. Therefore, drug development based on 2D systems is often misguided, resulting in billions of dollars of unfruitful R&D costs. So far, building complex and highly precise 3D structures with embedded living cells has been hampered by lack of suitable materials and printing systems. Thanks to the joint development of a novel hydrogel-based Bioink by Xpect INX and UpNano in combination with the new printing model by UpNano this endeavor has now turned into reality. For further information see the IDTechEx report on 3D Bioprinting 2018 - 2028: Technologies, Markets, Forecasts.
Machines and Materials
"The combined competences of UpNano in developing 3D-printing devices and Xpect INX in designing innovative materials for 3D-printing gelled well together," comments Peter Gruber, head of technology and co-founder of UpNano. "We co-developed X Hydrobio INX© U200, a highly biocompatible hydrogel, and at the same time we offer a 2-Photon 3D-printing device that provides the largest range of printed dimensions on the market." X Hydrobio INX U200 is a water-soluble hydrogel that allows transfer of cell cultures from 2D culture plates into complex 3D structures. "The gelatin-based X Hydrobio INX© U200 has been specifically developed for the encapsulation of multiple cell types thereby allowing the generation of complex 3D microtissues," says Jasper Van Hoorick, project lead at Xpect INX. "The hydrogel mimics the natural cellular environment and is biodegradable, thereby allowing the cells to gradually substitute the material with newly formed tissue." The gel solves the issues encountered with standard growth media on which cell cultures have been incubated in a 2D manner. Following this, the hydrogel containing living cells can be directly fed into the NanoOne Bio - a highly precise 2-Photon 3D-printer developed by UpNano. Extensive research showed that the 780 nm red light laser of the NanoOne Bio is not harmful to living cells, even at the exceptionally high power used by the NanoOne printers. In fact, the high laser power which is unique to UpNano's 2-Photon 3D-printing systems, allows for the use of optics that enable the fast production of cm large structures with exceptionally high precision, down to nanoscale.
Industry and Academia
The combination of X Hydrobio INX U200 and the NanoOne Bio opens up completely new possibilities in biomedical R&D, both in industry and academia. Recognizing the enormous potential, Prof. James J. Yoo, Wake Forest Institute for Regenerative Medicine (USA) decided to advice UpNano on future developments. The renowned expert for tissue engineering and biofabrication joins the company's Advisory Board as of April 2021 and will guide the continuous further development of novel applications for biomedical R&D. Production of labs-on-chip will now be possible not only with an unprecedented precision, but also directly with embedded living cells - thereby saving time and improving the significance of the results. Surface structures resembling natural tissues (biomimetic structures) can now be created, allowing for near natural interaction between the living cells and their growth environment. "Cells growing in 2D on a culture plate on standard growth media encounter a far from natural physical environment and a lack of interaction with surrounding cells in all directions, as observed in living tissues", explains Denise Mandt, Head of Marketing and Business Development and co-founder of UpNano. It has been acknowledged in biomedical R&D that such lack of 3D cell-to-cell-contact negatively impacts the interpretation of results gained in cell models for human applications.
The NanoOne Bio in combination with the newly developed X Hydrobio INX© U200 kit will significantly change this approach. Pharmaceutical companies and research institutions will be in the position to design cell models that mimic natural growth conditions in the human body. In fact, the NanoOne Bio allows the production of surface structures with highest precision and/or the design of complex 3D-scaffolding with embedded cells in the cm-range. Thanks to specific optical pathways, optimized scan algorithms and a proprietary adaptive resolution technology, the NanoOne systems also offer significant faster production times than other systems - advantages that have been recognized by customers on industry and academia alike. The range-extension for customers in biomedical research has already been met with great interest.
About UpNano (April 2021)
Founded in September 2018 as a spin out of the TU Wien, UpNano is a Vienna-based high-tech company with the focus on development, manufacturing and commercialization of high-resolution 3D-printing systems based on 2-photon polymerization. With the first commercial product, the printing system NanoOne, microparts with structure details ≥170 nm can be printed. Due to the very fast printing process, also meso scale parts up to several centimeters in height can be realized.
About Xpect INX
Xpect INX is a spin-off project from Ghent University focusing on the development of biomaterials for 3D-bioprinting applications. Based on years of experience in bio-ink development, Xpect INX offers and develops a whole range of ready to use (bio)inks for different 3D-printing technologies, including 2PP, DLP and deposition based 3D-printing.
Contact UpNano
Denise Mandt
Head Marketing & Business Development, Founder
Modecenterstrasse 22, D36
1030 Vienna, Austria
E denise.mandt@upnano.at
W www.upnano.at