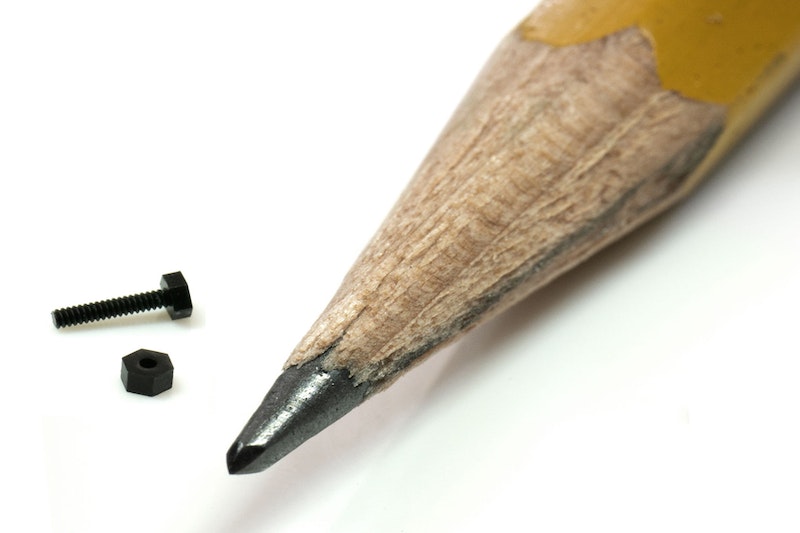 Whether it's computer chips, smartphone components, or camera parts, the hardware in many products is constantly getting smaller. The trend is pushing companies to come up with new ways to make the parts that power our world.
Enter Boston Micro Fabrication (BMF). The company was co-founded by MIT Professor Nicholas Fang in 2016 to improve the resolution and precision of 3D printing. Today BMF is helping customers in the race toward ever smaller parts by offering new kinds of printers that are being used to make electronics, medical devices, microfluidic chips, and more. The company's machines use a technology co-developed by Fang to print millimeter-sized products with details at the micron scale — objects you can see with the naked eye, but whose details you'll likely have to squint to make out. The company says the printers enable the creation of new parts with tiny, complex geometries and entirely new functions. For further information see the IDTechEx report on 3D Printing and Additive Manufacturing 2020-2030: COVID Edition.
"You can print things you can't mold," BMF CEO John Kawola says. "It's a reason why a lot of people think about additive manufacturing, because they're not constrained by the limits of molding. It gives companies new design freedom."
Micro technology for massive impact
Fang has been studying properties of light and microfabrication for more than 20 years. For the last 10 of those years, he's been a faculty member at MIT. A big part of his work, which takes place in his Nanophotonics and 3D Nanomanufacturing Laboratory, involves studying common 3D printing approaches that expose a material to light to harden, or cure, it. One such approach, digital light processing (DLP), uses a flash of light from a projector to cure each layer of material being printed. BMF uses a special lens to focus projected light at much smaller scales.
"The process shares a lot of similarities with regular microscopes, except we're delivering a digital picture instead of illuminating uniform light in a microscope," Fang explains of BMF's approach.
BMF has also developed novel software design and control systems to precisely move the printing platform during production.
To start forming the business, Fang worked with MIT's Venture Mentoring Service and sought guidance from MIT alumni and fellow faculty members. In 2017 the company was selected to go through the STEX25 startup accelerator, with is run by MIT Startup Exchange. Fang says the experience helped BMF think about what commercial opportunities to pursue and introduced the founders to partners like Johnson and Johnson in MIT's Industrial Liaison Program. Many of BMF's early customers were university research labs interested in pushing the limits of DLP printing. Since then, BMF has released printing platforms with steadily higher production speeds.
"It's about having a technology that can balance getting the best accuracy and surface finish possible with also being able to do something that is viable in a production environment," Kawola says.
BMF says its printing technology, called projection micro-stereolithography, makes it the only 3D printing company that can match the precision of injection molding. That allows customers to avoid ordering tiny molds for new products and prototypes, a process that can take time and be prohibitively expensive — Kawola says the molds needed to make some of the parts BMF prints cost up to half a million dollars. That makes 3D printing the cheaper and simpler production option in many cases.
The demand for smaller end-products is also driving BMF's market strategy directly. Some of the products companies have asked BMF to help make include microfluidic chips, surgical and medical diagnostic tools, components for virtual reality headsets, and hearing aids.
"I think the hearing aid example really shows how demand for the end application is driving the industry to make things in a more distributed and personalized fashion," Fang says.
Scaling up production — not size
BMF currently has about 100 machines deployed in a range of industries and research labs. Companies are mainly using the printers to prototype new products, but last fall BMF released the latest version of its printing platform, the microArch S240, which it calls the "first and only" microprecision 3D printer capable of short-run industrial production. The platform's production volume depends on the size of the part being made, but Kawola says for a part about 3 millimeters long, the microArch 240 can produce around 100,000 units per year.
The S240 is BMF's largest foray into industrial-scale production so far. Kawola acknowledges further innovation is needed if BMF is going to start making parts for higher-volume products.
"If it's going to be viable for higher volumes, like in many consumer products, the printing speed is probably going to need to get faster," Kawola says. "But we don't think it needs to be 10 times faster. If it's anywhere from three to five times faster, it starts to get economically viable for production (ranges in the hundreds of thousands to millions per year)."
The founders don't think they're many years off from reaching those milestones, mainly because they believe BMF will continue benefiting from innovation in industries that use the same parts as its printers.
"What's nice about industries like ours, 3D printing or robotics or others that are hardware-related, is we're all leveraging processing power getting cheaper and AI and machine vision becoming easier for us," Kawola says. "The DLP projector we use for the light source is the same thing that's used in a laptop projector or a projector you have for your home. As those get cheaper and higher resolution, you know, as 4k resolution becomes a real industrial use case for DLP projectors, then we can buy 4k, and all of a sudden our zone gets four times bigger. That means you can basically go four times faster."
Source and top image: MIT