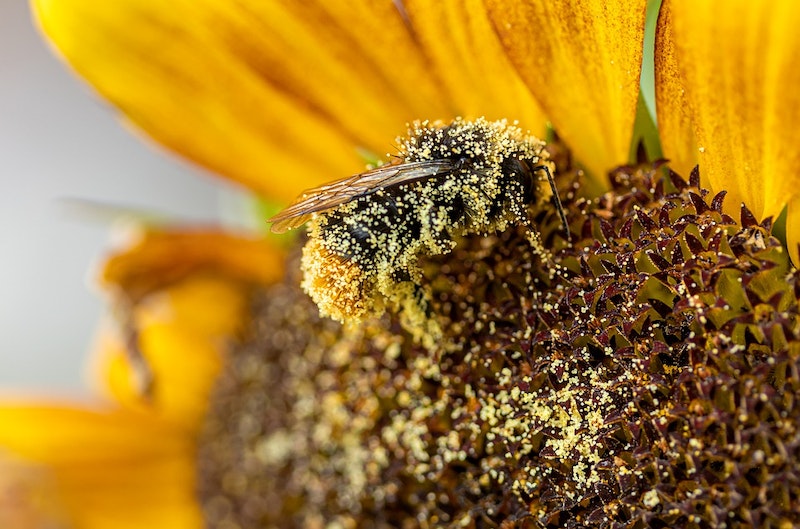 Scientists at Nanyang Technological University, Singapore (NTU Singapore) have found a way to use sunflower pollen to develop a 3D printing ink material that could be used to fabricate parts useful for tissue engineering, toxicity testing and drug delivery. This pollen-derived ink is able to hold its shape when deposited onto a surface, making it a viable alternative to current inks used for 3D printing in the biomedical field (also known as bioprinting). Such inks are usually soft and delicate, making it a challenge to retain the final product's desired 3D shape and structure as the bioprinter deposits the ink layer by layer.
To illustrate the functionality of their pollen-based 3D printing ink, the NTU Singapore scientists printed a biological tissue 'scaffold' that in lab studies was shown to be suitable for cell adhesion and growth, which are essential for tissue regeneration. This novel use for pollen, described in a scientific paper that was the cover feature of scientific journal Advanced Functional Materials, highlights its potential as a sustainable alternative material to current bioprinting inks, said the research team.
The study's co-lead author Professor Cho Nam-Joon of the NTU School of Materials Sciences and Engineering said: "Bioprinting can be challenging because the material of the inks used is typically too soft, which means the structure of the envisioned product may collapse during printing. Through tuning the mechanical properties of sunflower pollen, we developed a pollen-based hybrid ink that can be used to print structures with good structural integrity. Utilising pollen for 3D printing is a significant achievement as the process of making the pollen-based ink is sustainable and affordable. Given that there are numerous types of pollen species with distinct sizes, shapes, and surface properties, pollen microgel suspensions could potentially be used to create a new class of eco-friendly 3D printing materials." For further information see the IDTechEx report on 3D Bioprinting 2018 - 2028: Technologies, Markets, Forecasts.
Study co-lead author Assistant Professor Song Juha from the NTU School of Chemical and Biomedical Engineering said: "Our findings could open new doors to customised flexible membranes that fit the human skin's contours exactly, such as wound dressing patches or facial masks. Such soft and flexible membranes are usually manufactured based on flat geometry, thus resulting in problems such as fractures in the layers or a poor fit when applied on large surface areas of skin, such as the face or areas that see frequent movement like the joints. Using our pollen-based 3D printing ink, which is biocompatible, flexible, and low in cost, we can fabricate membranes that are tailored to the contours of the human skin and are capable of bending without breaking." The research team also includes Assistant Professor Jang Taesik from Chosun University in South Korea.
Professor Paul S. Weiss, Distinguished Professor of Chemistry & Biochemistry, Bioengineering, and of Materials Science and Engineering at the University of California, Los Angeles, who was not involved in the study, said: "Pollen is a fascinating and sustainable bionanomaterial with a myriad of uses. Song, Cho, and their teams have now added it to the arsenal of what can be structured at larger scales through additive manufacturing, 3D printing, by incorporating it into an ink."
Dr Jeffrey S. Glenn, Director of the Center for Hepatitis and Liver Tissue Engineering at Stanford Medicine, who was not involved in the study, added: "This is a very exciting paper that shows the ability to 3D print customised structures for manufacturing and drug delivery with a sustainable, cheap, and non-toxic material."

How the pollen-based hybrid ink is developed

The most widely used bioprinting method today is extrusion-based bioprinting, in which inks are dispensed continuously from nozzles and deposited along digitally defined paths to fabricate 3D structures layer by layer. One of the challenges of this method is the difficulty in retaining the 3D structures and shapes of soft delicate materials like hydrogels, cells, and biopolymers without additional support. A structure called a supporting matrix, within which the soft ink is deposited during the printing process, is typically used. However, this creates waste since the supporting matrix becomes unusable after printing.
Asst Prof Song said: "Previous research efforts were focused on developing special bioinks for efficient deposition and printability through mixing hydrogels with fibres or particles. The main drawback of such hydrogel composite inks is nozzle clogging, which is a more significant issue in inks with a higher content of such fibres or particles. The pollen-based hybrid ink we have developed, in contrast, is mechanically strong enough to retain its structure without jamming the printer."
The development process of the pollen-based hybrid ink starts with incubating tough sunflower pollen in an alkaline solution - an environmentally-friendly process similar to soapmaking - for six hours to form pollen microgel particles. The pollen microgel is then mixed with hydrogels such as alginate, a naturally occurring polymer typically obtained from brown seaweed, or hyaluronic acid, a clear, gooey substance naturally produced by the body, to form the final pollen-hydrogel hybrid ink.

As a proof-of-concept, the scientists printed a five-layer tissue engineering scaffold, useful for culturing cells, in 12 minutes. Collagen was then added to the scaffold to provide anchor points that cells can adhere to and grow. The scientists then seeded human cells on the scaffold and found it to have a high cell-seeding efficiency of 96 per cent to 97 per cent. This is comparable performance to the inverted colloidal crystal (ICC) hydrogels that are widely utilised as 3D cell culture platforms but that are time-consuming and laborious to fabricate.
Given that pollen responds to pH changes - when an environment turns acidic or alkaline - the NTU team also tested the viability of the 3D scaffold as a stimulus-responsive drug delivery system. When a fluorescent red dye was dripped onto the scaffold, the scientists found that the pollen microgel particles released the dye into the scaffold gradually. The amount and rate of release increased with the addition of an acid. This shows that there is potential for the pollen scaffold to be used as a drug delivery system with controlled release, said the scientists.
Prof Cho said: "Pollen microgel particles have a hollow shell structure, which means they could potentially be used to carry drugs, cells, or biomolecules in drug delivery platforms with customised 3D structures. We are now looking at how we can use these pollen microgel scaffolds for 3D cell culture platforms in various biomedical applications. There is also potential for the pollen-based scaffold to be used as a smart drug carrier, given pollen's stimulus-responsive nature. For instance, we can further slow down the release of drugs by coating the pollen-based scaffold with a thin layer of alginate, and stimulate the release by introducing an acid."

The scientists also found that that the soft and flexible pollen microgel particles, derived from tough pollen grains, could potentially serve as a recyclable support matrix, for use in freeform 3D printing, in which soft ink is deposited. The support matrix prevents the collapse of the printed structure as the ink cures.
To test the feasibility of their approach, the scientists fabricated a 3D printed silicon rubber mesh for the elbow using pollen microgel as the support that would retain the elbow mesh's shape as it is being printed. After curing the printed product at 75°C (167°F) for 24 hours inside the pollen microgel, the scientists found that the printed 3D silicone rubber mesh could adapt to the human elbow curvature. They also found that the mechanical properties of the silicone rubber samples printed and cured in the pollen microgel supporting matrix were similar to those of samples fabricated via the traditional casting method.
The use of pollen in the biomedical field builds on the NTU research team's body of work on repurposing pollen grains, a natural renewable resource, into a building block for various eco-friendly alternative materials, from eco-friendly paper to biodegradable sponges that can soak up oil pollutants. The team is now looking to collaborate with industry to refine their 3D printing innovation and advance its commercial uptake.
Source: Nanyang Technological University
Top image: Pixabay