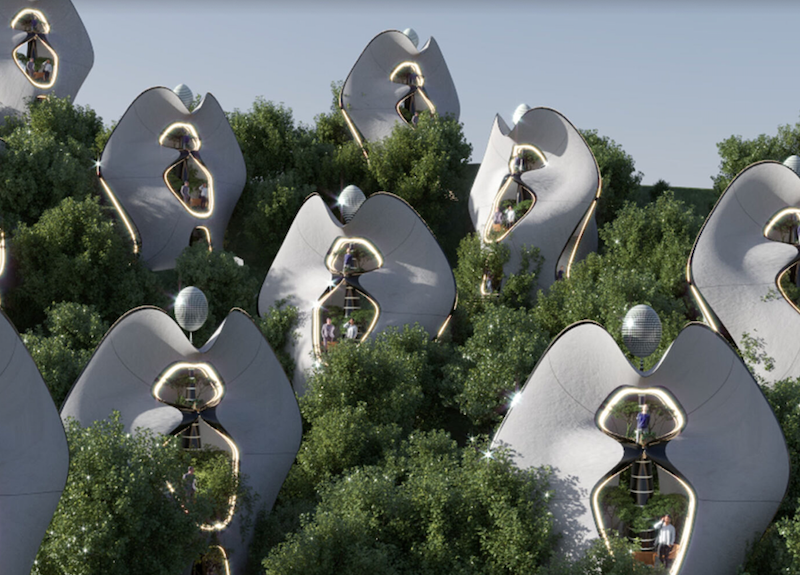 MASK Architects has designed the world's first steel 3D printed structure of modular houses for Nivola Museum's visitors,Tourists and Artists in Orani, city of Sardinia.Öznur Pınar Çer and Danilo Petta have Inspired from the work of Costantino Nivola, they have designed "Exosteel Mother Nature" modular houses which they have taken inspiration from him sculpture called the "La Madre".
The studio is the first architecture and design studio in the world to use a steel 3D-printed "exoskeleton" construction system that supports and distributes all the functional elements of the building, using their new solution of construction technique which they called "EXOSTEEL". The house is composed firstly by a hollow central column inserted for one / third of its length into the ground and by various organic branches that support the three floors of the building. On each floor a perimeter frame divides and supports the facades made up of panels modeled to follow the organic shape of the house. "Madre Natura '' or known as "Mother Nature" will be the name given to this project and development. For further information see the IDTechEx report on Metal Additive Manufacturing 2020-2030.
The architects want Orani City to become an iconic landmark in which it can be admired from a distance as well as within the city by all as viewing art and landmarks. The site on which MASK Architects have situated their development is a sloppy mountain side that will be transformed into staggered sections . Surrounded by natural scenery the modules are designed in a way to allow wind to pass through.
Each building which is "self sustainable" can also provide energy resources to the grid of the development. Each module is expandable and flexible so that they can always suit any terrain and meet the needs of any development. Each building is centered with a 'Energy Tower' that will provide all natural generated energy from Solar and Wind. The Energy Tower is covered with solar panels that will harvest solar energy while the top of the centered energy tower itself will rotate 360 degrees at the same time with the wind that will also generate energy through wind turbines. The voids in the modules allow channeled wind through that can be directed to the wind turbines. Placed at the top of the tower are also some technological instruments such as smart-cameras and fire detectors. This is to provide social security and also to have natural security against natural disasters. Throughout the lower part of the centered tower is housing for all the technical equipment of the module that houses storage for water and energy as well as distribution stations for the surroundings.
There are many different formations in which these modules can be situated, from a single module being sustainable on its own to a gathering of modules in a kite diamond formation to create a small community with the aim of it being self powering.
Source and top image: MASK Architects