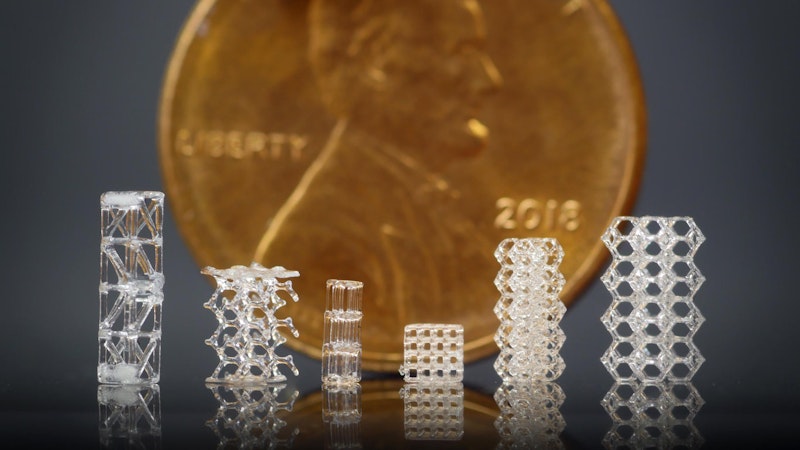 Researchers at UC Berkeley have developed a new way to 3D-print glass microstructures that is faster and produces objects with higher optical quality, design flexibility and strength, according to a new study published in the April 15 issue of Science.
Working with scientists from the Albert Ludwig University of Freiburg, Germany, the researchers expanded the capabilities of a 3D-printing process they developed three years ago — computed axial lithography (CAL) — to print much finer features and to print in glass. They dubbed this new system "micro-CAL."
Glass is the preferred material for creating complex microscopic objects, including lenses in compact, high-quality cameras used in smartphones and endoscopes, as well as microfluidic devices used to analyze or process minute amounts of liquid. But current manufacturing methods can be slow, expensive and limited in their ability to meet industry's increasing demands. For further information see the IDTechEx report on 3D Printed Materials Market 2020-2030: COVID Edition.
The CAL process is fundamentally different from today's industrial 3D-printing manufacturing processes, which build up objects from thin layers of material. This technique can be time-intensive and result in rough surface texture. CAL, however, 3D-prints the entire object simultaneously. Researchers use a laser to project patterns of light into a rotating volume of light-sensitive material, building up a 3D light dose that then solidifies in the desired shape. The layer-less nature of the CAL process enables smooth surfaces and complex geometries.
This study pushes the boundaries of CAL to demonstrate its ability to print microscale features in glass structures. "When we first published this method in 2019, CAL could print objects into polymers with features down to about a third of a millimeter in size," said Hayden Taylor, principal investigator and professor of mechanical engineering at UC Berkeley. "Now, with micro-CAL, we can print objects in polymers with features down to about 20 millionths of a meter, or about a quarter of a human hair's breadth. And for the first time, we have shown how this method can print not only into polymers but also into glass, with features down to about 50 millionths of a meter."
To print the glass, Taylor and his research team collaborated with scientists from the Albert Ludwig University of Freiburg, who have developed a special resin material containing nanoparticles of glass surrounded by a light-sensitive binder liquid. Digital light projections from the printer solidify the binder, then the researchers heat the printed object to remove the binder and fuse the particles together into a solid object of pure glass.
"The key enabler here is that the binder has a refractive index that is virtually identical to that of the glass, so that light passes through the material with virtually no scattering," said Taylor. "The CAL printing process and this Glassomer GmbH-developed material are a perfect match for each other."
The research team, which included lead author Joseph Toombs, a Ph.D. student in Taylor's lab, also ran tests and discovered that the CAL-printed glass objects had more consistent strength than those made using a conventional layer-based printing process. "Glass objects tend to break more easily when they contain more flaws or cracks, or have a rough surface," said Taylor. "CAL's ability to make objects with smoother surfaces than other, layer-based 3D-printing processes is therefore a big potential advantage."
The CAL 3D-printing method offers manufacturers of microscopic glass objects a new and more efficient way to meet customers' demanding requirements for geometry, size and optical and mechanical properties. Specifically, this includes manufacturers of microscopic optical components, which are a key part of compact cameras, virtual reality headsets, advanced microscopes and other scientific instruments. "Being able to make these components faster and with more geometric freedom could potentially lead to new device functions or lower-cost products," said Taylor.
Source and top image: UC Berkeley