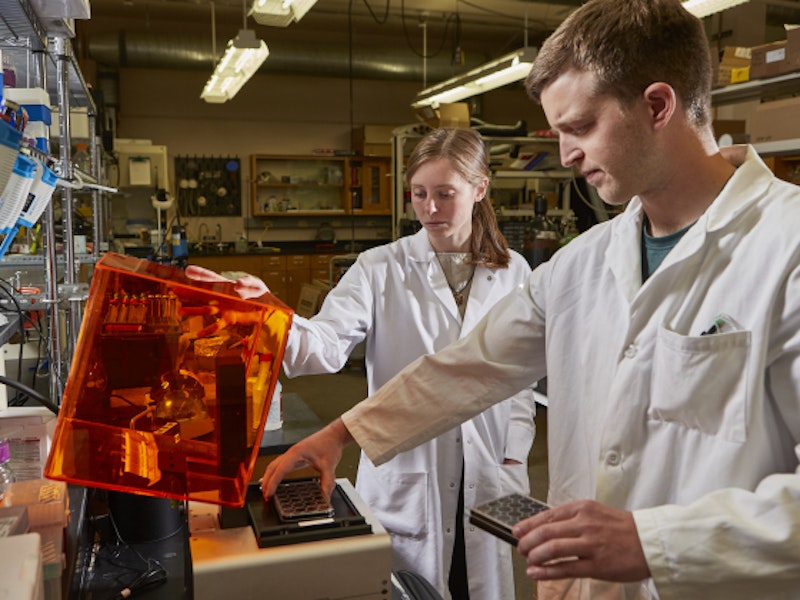 Combatting life-threatening bacterial infections, reducing slime that clogs pipes, preventing plaque buildup on teeth — all could one day benefit from a new technology being developed by Montana State University researchers. When bacteria and other microbes stick to surfaces and create slimy mats — called biofilm — they form complex communities that are often resistant to traditional disinfectants. Now, scientists in MSU's Center for Biofilm Engineering are developing a tool for replicating the microbial mosaics so that innovative treatments can be studied.
"We're excited to share the first glimpses of this technology," said Isaak Thornton, who is earning his doctorate in mechanical engineering. Thornton, along with microbiology doctoral student Kathryn Zimlich, presented their work to researchers and industry partners from around the world to discuss the latest biofilm science.
For the past two years, Zimlich and Thornton have designed and tested a 3D printing device that can precisely lay out a grid of individual bacteria in hydrogel — a clear, Jell-O-like substance. Tapping into advances in 3D printing, the researchers can map out the microbes within drops of liquid hydrogel resin and then use laser light to solidify the material, constructing a rudimentary biofilm. For further information see the IDTechEx report on Hydrogel Markets in Agriculture, Industry, Energy, Electronics, Electrical, Consumer 2022-2042.
"We can spatially arrange and encapsulate cells exactly where we want them," said Thornton, who is conducting the research in the lab of Jim Wilking, associate professor in the Department of Chemical and Biological Engineering in MSU's Norm Asbjornson College of Engineering.
So far Zimlich and Thornton have only used a single species of bacteria, but by using the 3D printer to do multiple passes, each with a different species or strain of bacteria, they could start to create the more complex and layered biofilms found in nature. By adding fluorescent dye to the bacteria, the researchers can easily see the microbes using specialized microscopes, allowing them to study the interactions that happen among the cells.
"Even the simplest biofilm systems are complicated," Zimlich said. "It's like a forest where there's a lot of diversity. We've needed new tools to see how that diversity develops and is maintained."
It's known that the dynamic environment within a biofilm can contribute to making microbes resistant to traditional treatments. MSU Regents Professor and longtime biofilm researcher Phil Stewart has shown that a bacteria that commonly causes dangerous wound infections resists antibiotics because the cells in the lower level of the biofilm are cut off from oxygen and other compounds, causing them to go dormant and thereby changing their biology enough that the drug is rendered ineffective.
"One thing that's becoming clearer is that there's potential to treat these pathogenic bacteria by altering the interactive biofilm environment instead of trying to use harsh chemical products," said Zimlich, whose research adviser is Matthew Fields, director of the Center for Biofilm Engineering. For example, treatments could involve introducing harmless bacteria that compete with the harmful microbes and disrupt the protective biofilm.
Developing those treatments will require lots of testing in a controlled lab environment, which is where the new 3D printing tool comes in. "We think it's possible to construct analogs of how these pathogenic biofilms form naturally," Zimlich said.
That's potentially of great interest to the attendees of the biofilm meeting. Companies like Procter and Gamble, 3M and Ecolab, as well as NASA, are eager to develop new ways of effectively controlling problem biofilms, according to Paul Sturman, who coordinates the center's work with its roughly 30 industrial partners.
"It's really all about helping them develop products that are useful," Sturman said.
Since it was founded more than 30 years ago, the Center for Biofilm Engineering has been a world leader in the study of biofilms, pioneering an interdisciplinary approach that combines multiple areas of engineering, microbiology and other fields to solve real-world problems.
Source and top image: Montana State University