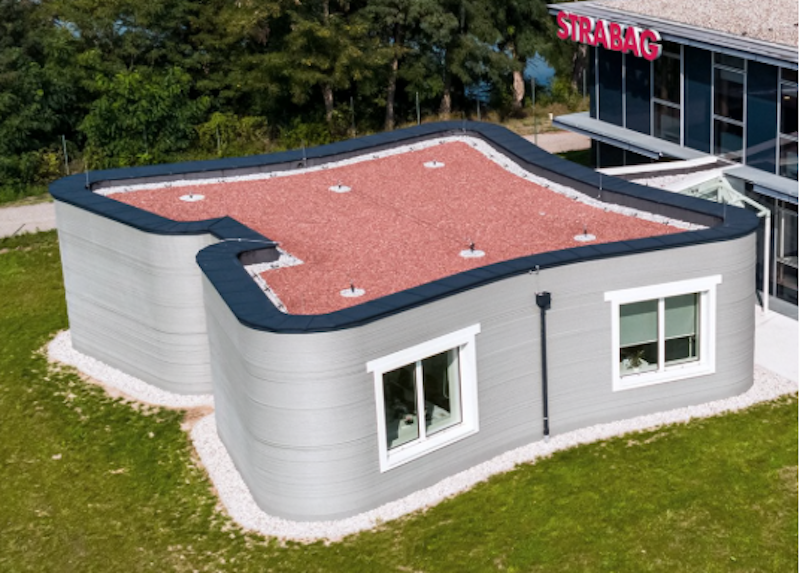 Europe's first 3D printed office extension has opened in Hausleiten in Austria. The project is a result of a collaboration between the construction technology group STRABAG and the scaffolding and formwork manufacturer and 3D concrete printing pioneer PERI. The building is a 125 m2 office extension to an existing building in Hausleiten.
"The building in Hausleiten is a milestone for STRABAG, for PERI, for all involved. And a milestone for the Austrian construction industry as a whole," said Thomas Imbacher, Member of the Board for Innovation & Marketing at PERI SE. "We are convinced that 3D printing of buildings will be part of the future of construction as this technology offers solutions for challenges that are currently occupying our industry: Digitalization, efficiency, shortage of skilled workers and much more."
The extension building was printed with a BOD2, the best-selling 3D construction printer globally from COBOD. The maximum printing speed of the BOD2 3D construction printer at one meter per second is the fastest in the world, and consequently the shell construction in Hausleiten was completed in around 45 hours of pure printing time. For further information see the IDTechEx report on 3D Printing and Additive Manufacturing 2023-2033: Technology and Market Outlook.
In addition, 3D printing in general allows design freedom compared to classic concrete construction, such as architecturally appealing rounded shapes. This office building in Austria impresses with its unusual architectural form and the structures of the printed concrete are recognizable as a design element on the facade, which gives the building a special appearance in addition to the cloverleaf shape.
Henrik Lund-Nielsen, Founder & General Manager of COBOD International, said: "We are proud to see more and more buildings being 3D printed with our BOD2 printer as a consequence of our leading position in the market." He continued: "Our superior technology is documented by COBOD's technology 3D printing multiple applications other than just low-rise residential buildings, such as windmill tower bases, concrete pipe supports, schools and now an office building. We firmly believe that 3D construction printing will revolutionize the construction industry due to its ability to automate and industrialize the construction process."
In 2018 PERI Group acquired a minority stake in COBOD. Since then, both companies have worked closely together to push the boundaries of 3D construction printing. With the printing project in Hausleiten, the PERI 3D printing team have now successfully completed six printing projects with COBOD's 3D construction printers. These include the first 3D printed house in Germany, the first 3D printed multi-family house/apartment building in Europe and now the office extension in Hausleiten.
About COBOD International
COBOD's mission is to build a better future by disrupting the global construction industry through world-class 3D construction printing robots. COBOD is the biggest 3D construction printing provider globally with the most projects and activities across all continents. COBOD has an open-source strategy, partnering with customers, academic institutions, and suppliers around the world. COBOD is privately owned with General Electric, CEMEX, and PERI as key shareholders, and its partners further include Dar Al Arkan (Saudi Arabia), L&T Construction (India), and JGC (Japan). COBOD is headquartered in Denmark with a regional office in Kuala Lumpur and soon opening a regional office in North America. The team consists of 100 highly competent pioneers from 25 nationalities and has a truly global presence with customers and partners across the globe. Visit COBOD.com for more information.
Source and top image: My News Desk