Since the first consumer-level 3D printers came on the scene six years ago their sales have grown substantially. Around 100,000 of these printers were sold last year. Despite 20 years of industrial 3D printer legacy, Makerbot went from nothing to the most popular 3D printer brand in the world. Given the dramatic growth many are predicting ever greater sales in the future and potentially a 3D printer in every home. But few have stopped to ask "who buys consumer-level 3D printers"? IDTechEx have studied this and, with the help of several major players in 3D printing, compiled the following graph showing the proportion of sales to consumers as a function of price: 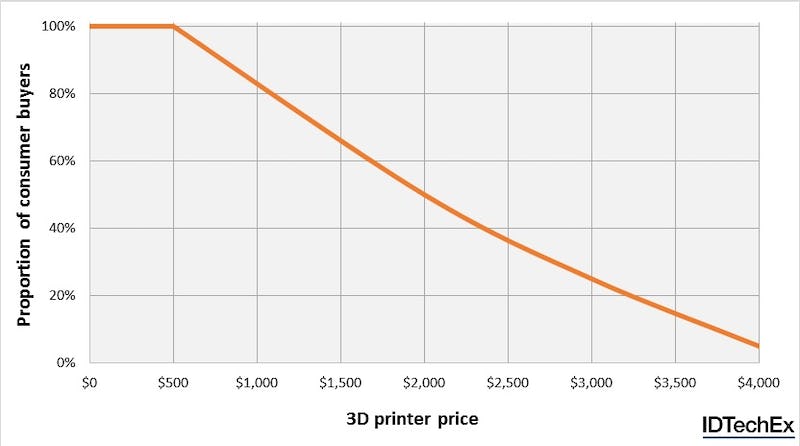 Full disclosure is given in the IDTechEx report 3D Printing 2015-2025: Technologies, Markets, Players
With most consumer-level 3D printers selling around the $2,000 price mark this market research shows that only around a half of all consumer-level 3D printers are actually being sold to consumers. Printers under $500 sell entirely to consumers and printers costing $4,000 only sell 5% to consumer. This obviously raises the question of who else is buying all of these printers.
Several other groups are responsible for the other half of sales of consumer-level 3D printers. The largest other group is currently professionals. Many professionals are buying consumer-level 3D printers for use in labs, workshops and even offices to make small plastic objects. This work ranges from mundane repairs to exploratory study of how 3D printing might affect different businesses. The education sector, schools and universities, are also buying significant numbers of consumer-level 3D printers. Many 3D printer vendors have noticed this and are targeting schools with projects such as Makerbot Academy and Ultimaker Create. The UK added 3D printing and robotics as mandatory subjects to be studied by all eight year olds this academic year. However, despite best efforts such ventures are meeting significant resistance due to inevitable constraints such as funding and teacher training.
And what of the future? At IDTechEx, we believe current technology is not capable enough to warrant having a 3D printer in every home. In fact, we see consumer 3D printers as being more like power tools than office equipment. They often live in the garage. Consumables are usually bought from third parties rather than the equipment vendor. Most practical applications fall under the remit of miscellaneous tinkering. Therefore, regarding the consumer 3D printer market as part of the global home power tool market we forecast that the current meteoric rise in sales of consumer printers will slow down very rapidly. Specifically, that the 100% growth seen in recent years will fall to just 20% growth by 2025. In this hare and tortoise race, the professional and educational sectors prove to be the tortoise with a slower start but larger addressable markets means sustainable growth for at least the next decade.
For our complete analysis of the current market and players with a ten-year forecast covering bioprinting, aerospace, automotive, dental, medical, consumer products, oil and gas, jewelry and other sectors please read the IDTechEx report 3D Printing 2015-2025: Technologies, Markets, Players
Also attend the IDTechEx 3D Printing Europe 2015 event, in Berlin on 28-29 April - see www.IDTechEx.com/3DP-Europe.
Top image: The Form 1 3D Printer, Formlabs
Learn more at the next leading event on the topic: Healthcare Sensor Innovations USA 2020