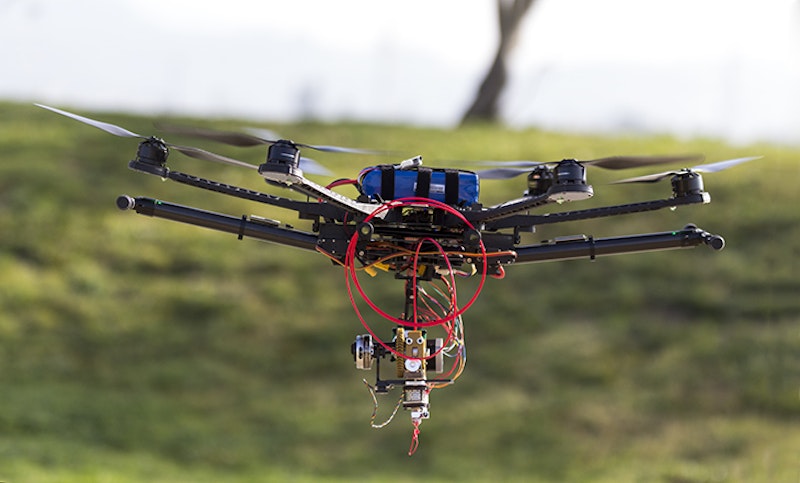 A fully automated mobile platform for 3D printing capable of producing objects of limitless scale does not currently exist.
In the hope of remedying this situation, Gensler's Los Angeles office initiated Mobile 3D Printing, a Gensler research project born from an observation of present-day 3D printing technology and its limitations.
This project will span several years and seek to create a fully functional unmanned aerial vehicle (UAV) capable of 3D printing. The team decided to undertake this project for the following reasons:
They have observed efforts in various regions of the world to increase the size of 3D prints. Many harbor the ambition to use this technology to print larger objects such as cars, rooms, and even homes. Every effort to create such a printer increases the size of the X-Y-Z axis constraints begging the question, why can't we circumvent these constraints by removing them entirely?
Unlimited X-Y-Z axis constraints on a 3D printer provide designers with unlimited design freedom; they no longer have to adjust scale or unitize designs to meet manufacturing requirements. So by undertaking this project, Gensler are laying the foundations for the creation of technology capable of making anything of any size, anywhere.
They could not resist the spirit of curiosity and invention and wanted to push the limits of conventional 3D printing and UAV technology to see what's possible.
The first year of this multi-year project concluded in April 2014 with the successful deployment of the hexacopter prototype, MUPPette. The name stands for Mobile Unmanned Printing Platform; the -ette designates it as a small version of a scalable vehicle. MUPPette marries advanced consumer robotic technology with a 3D printer, enabling in-air extrusion of a thin line of PLA plastic filament in an outdoor environment.
The hexacopter proved to be the ideal initial platform to provide X-Y-Z axis freedom as well as the payload capacity necessary to conduct early testing. PLA plastic was selected as the build material due to its light weight, availability of components, and lower melting point. A camera gimbal was reconfigured to stabilize the 3D printer from the movement of the hexacopter.
The team envisions various construction applications for MUPPs in the future. A large scale MUPP could be deployed to sites cut off from or limited by conventional modes of transportation to serve a variety of social or humanitarian purposes. MUPPs could also be teamed together to form the basis for an autonomous workforce in commercial construction, combining the layout and construction of building elements in-place by a fleet of intelligent devices.
This represents only the very beginning of a multi-year endeavour and the team welcomes community contributions to this promising new adaptation of mobility and 3D printing.
Source and top image: Gensler
Learn more at the next leading event on the topic: 3D Printing & 3D Electronics Europe 2020