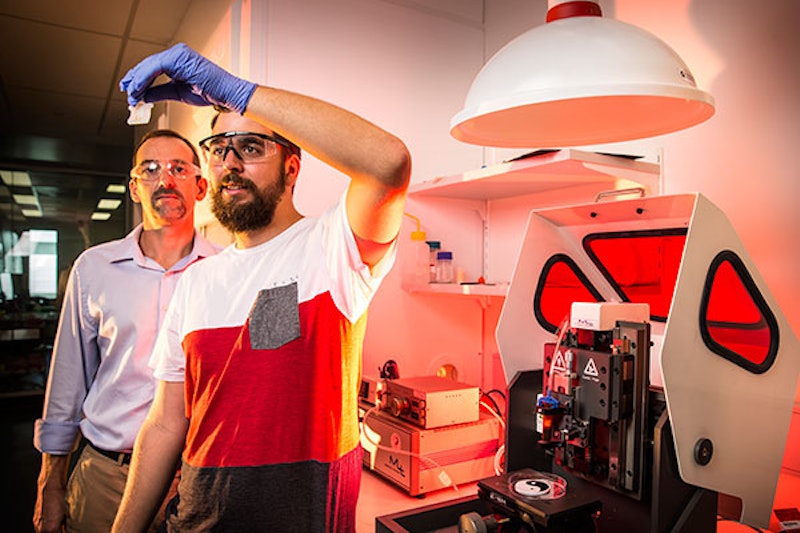 The fourth dimension is time, shape shifting in fact, and the ARC Centre of Excellence for Electromaterials Science (ACES) at the University of Wollongong (UOW) is helping to set the pace in the next revolution in additive manufacturing.
Just as the extraordinary capabilities of 3D printing have begun to infiltrate industry and the family home, researchers have started to develop 3D printed materials that morph into new structures, post production, under the influence of external stimuli such as water or heat - hence the name, 4D printing.
So, as in 3D printing, a structure is built up layer by layer into the desired shape, but these new materials are able to transform themselves from one shape into another, much like a child's Transformer toy.
This ground-breaking science promises advancement in myriad fields - medicine, construction, automation and robotics to name a few.
ACES researchers have turned their attention to the medical field of soft robotics, manufacturing a valve that actuates in response to its surrounding water's temperature. ACES Professor Marc in het Panhuis said it was the cleverness of the valve's creation that was remarkable. "The cool thing about it, is it's a working functioning device that you just pick up from the printer," he said. "There's no other assembly required."
The materials scientist said the valve, a 3D printed structure, possessed actuators that are activated solely by water. "So it's an autonomous valve, there's no input necessary other than water; it closes itself when it detects hot water," he said.
The ACES Chief Investigator said the ACES group was the first to combine printing a 4D device with four different cartridges simultaneously, while using tough gels with the incorporated actuating materials.
Authors Shannon Bakarich (PhD candidate), Doctor Robert Gorkin III, Professor Marc in het Panhuis and Professor Geoff Spinks have published the work in Macromolecular Rapid Communications under the title '4D Printing with Mechanically Robust, Thermally Actuating Hydrogels'.
Source and top image: University of Wollongong
Learn more at the next leading event on the topic: 3D Printing & 3D Electronics Europe 2020