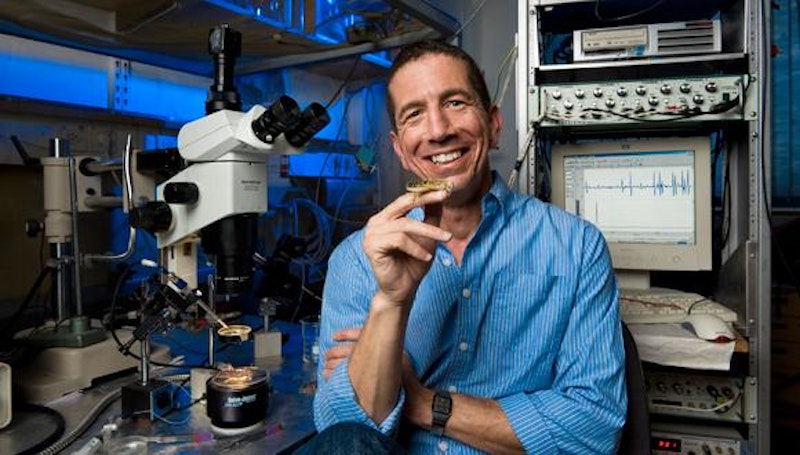 Since the 1980s, advanced robotic platforms have provided assistance to crisis intervention teams in the wake of man-made and natural disasters. The objective of such robots, in various sizes and shapes, has been to intervene where humans cannot and send life-saving data to rescue teams in the field.
A new miniature robot is poised to make a major contribution to the field of advanced robotics. The new locust-inspired robot, dubbed "TAUB" (for "Tel Aviv University and Ort Braude College"), is five inches long and weighs less than one ounce. It can jump 11 feet high — more than twice the height of similar-sized robots — and cover a horizontal distance of 4.5 feet in one leap. The researchers believe the TAUB will perform well in search-and-rescue missions and in reconnaissance operations in rough terrain.
The robot is the result of a collaboration between Prof. Amir Ayali of the Department of Zoology at Tel Aviv University's George S. Wise Faculty of Life Sciences, Dr. Gabor Kosa of TAU's Iby and Aladar Fleischman Faculty of Engineering and Dr. Uri Ben-Hanan of the Department of Mechanical Engineering at Ort Braude College. The research for the study was primarily conducted by TAU engineering students Valentin Zeitsev and Omer Gvirsman, as well as Dr. Avi Weiss of Ort Braude College. The research was recently published in Bioinspiration & Biomimetics.
Inspired by nature
"Our locust-inspired miniature jumping robot is a beautiful example of bio-inspired technological innovation," said Prof. Ayali. "Miniature robots are of special interest in the robotics field, attracting a lot of attention and research. The manufacture of tiny robots is cheap and efficient; their small size allows them to traverse difficult and unknown terrain; and many can be used in any given situation."
The scientists printed out the body of the robot on a 3D printer harnessing ABS plastic (the same material Legos are made of). The robot's legs were composed of stiff carbon rods, and its torsion springs of steel wire. A small on-board battery powers the robot, which is remotely controlled through an on-board microcontroller.
"Our research is a true interdisciplinary biology-engineering collaborative effort," said Prof. Ayali. "Biological knowledge, gained by observing and studying locusts, was combined with state-of-the-art engineering and cutting-edge technologies, allowing biological principles to be implemented in a miniature robotic jumping mechanism."
The same, but different
Researchers did not attempt to produce an exact mechanical replica of a locust. They focused instead on some of the specific biomechanical features of the locust's highly successful jump mechanism.
A locust catapults itself in a three-stage process. First, the legs are bent in the preparation stage. Then the legs are locked in place at the joint. Finally, a sudden release of the flexor muscle on the upper leg unlocks the joint and causes a rapid release of energy. This creates a fast-kicking movement of the legs that propels the locust into the air.
Like the locust, which uses stored mechanical energy to enhance the action of its leg muscles, the robot's "high-jump" is due to its ability to store energy in its torsion springs.
The researchers are currently working on a gliding mechanism that will enable the robot to extend its jumping range, lower its landing impact, execute multiple steered jumps and stabilize while airborne, expanding the possible field applications of the robot.
Source and top image: Tel Aviv University
Learn more at the next leading event on the topic: 3D Printing & 3D Electronics Europe 2020