Out of the lab and into a plane: Materials making aircraft lighter

In the aerospace sector reducing the weight is one of the greatest constant priorities. Due to the high technical requirements, economic and legislative drivers, and relatively deep pockets, aerospace is often the first significant adopter of emerging lightweight materials. This article highlights some of these materials at different stages of technology readiness and suggests what their initial application will be.
IDTechEx has released a new report on Additive Manufacturing and Lightweight Materials for Aerospace and Defense 2018-2028, this goes far beyond what is traditionally available through the extensive gathering of technical primary information. The analysis contains roadmaps, forecasts, company profiles, and technology assessments in one of the key sectors in the adoption of early-stage technologies. This builds upon IDTechEx reports on Composites, Lightweight Metals, Additive Manufacturing and much more.
The world of advanced materials is extensive but making the jump from academic or R&D labs to commercial success is a tortuous and challenging path. Motorsport and sporting goods often provide initial market entries due to lower regulatory barriers, but in many cases, the first industry that allows capacity to scale-up and notable revenues to emerge is the aerospace and defense sector. Ceramic Matrix Composites (CMC), Metal Matrix Composites (MMC), polymer aerogels and CNT-yarns are examples of those emerging materials and will be discussed here. Another key trend is the evolution of polymer composites which was discussed in a previous article. 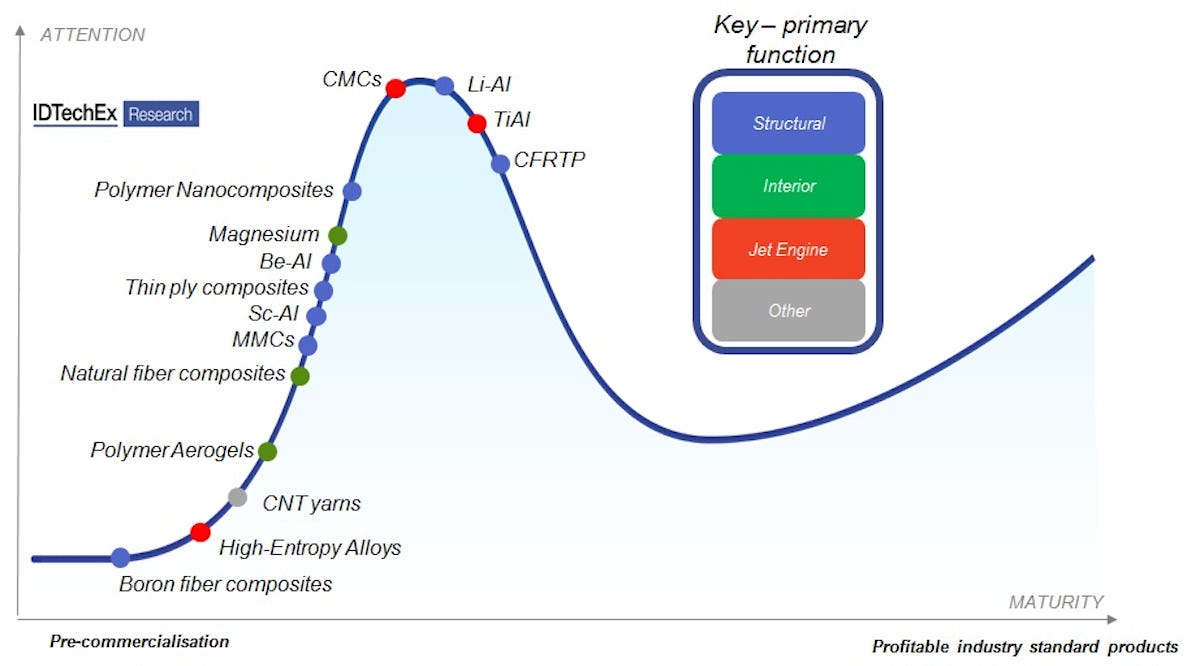 CMCs are right on the cusp of rapid growth, both Ox/Ox (typically alumina/alumina) and SiC/SiC varieties have received significant investments and will begin to reap the rewards. The most significant is the use of continuous ceramic fibers, of which the main players (brand or subsidiary in parenthesis) are 3M (Nextel) and Unifrax (Saffil) for alumina fibers and NGS Advanced Fibers (Nicalon) for silicon carbide fibers.
The aerospace roles are dominated by those that require the highest temperatures, which results in the early uptake being in jet engines and exhaust nozzles. The material is not only lighter than the superalloys they are displacing, but also have an improved efficiency in the cooling requirements. More information on continuous ceramic fibers can be seen here.

Metals have seen their share of aerospace structures gradually diminish, but emerging alloys and the growth of additive manufacturing give it an improved outlook and helping the fight back against polymer composites. Aluminium alloys, specifically lithium, beryllium, and scandium varieties, have been analysed in a previous article and as can be seen above other alloys such as titanium aluminide and high-entropy alloys all feature heavily when considered with aerospace.
MMCs are also having a resurgence after many false-starts, driven by technical advancements, predominantly surrounding the additives, and a demand as many other solutions become exhausted. These drivers and key players were laid out in a previous article and their role can be varied across numerous sectors
Utilisation within the aerospace and defense industry is coming from the use in highly wear resistant parts, such as gearboxes, or in the ability to enhance aluminium. Aluminium can not only benefit from an enhanced strength, stiffness but also the performance at elevated temperatures and an improved corrosion resistance. The long-term proposed applications could be in parts as significant as landing gear, exemplified by a recent grant led by Safran utilising Alvant (previously CMT) aluminium composite technology.

When many people think of aerogels they imagine transparent brittle silica monoliths, but the commercial reality is very different. The industry is dominated by silica blankets for the superior insulative properties, but there is an emerging type that is highly relevant for aerospace. Polymer aerogels are highly porous continuous networks (typically polyimides, polyureas, or polyurethanes) and can be made as monoliths or films through either supercritical or ambient pressure drying methods. Unlike their silica counterparts, excluding some minor exceptions, monoliths are not brittle and display good strength. Aerogel Technologies recently made the largest panel and information on this production and route can be seen in a previous article.
Aerogel Technologies produce material, called Airloy, that not only reduces weight over other polymers given the high porosity, but also significant insulation and soundproofing. There are significant links for aerospace interiors looking to employ this material. Outside of interiors, the role of polymer aerogel for antennas and with composite material show aerogels has much more versatility and potential than many are aware of.

The role of nanomaterials is highly relevant to aerospace. The reader is directed to previous articles for more information on the graphene industry or the use of nanomaterial in polymer composites. However, an increasing opportunity comes in the use of pure continuous CNT-yarns.
There are a variety of routes in forming CNT-yarns including CVD processes and wet, dry, or electro-spinning methods. The electrical (ca. 1/10th conductivity copper) and mechanical properties (ca. 10x tensile strength of copper) are ever improving, and more young companies are forming. The interest from aerospace is growing and the proposed applications vary from data transmission cables, EMI shieldings, and motor windings.
This article provides a snapshot of some of the emerging material relevant for advanced lightweight technologies. For more information on this and more see the report Additive Manufacturing and Lightweight Materials for Aerospace and Defense 2018-2028.
Top image: The Peoples Pharmacy