"Eventually 3D printing will print people," according to Will.i.am, the music producer, rapper and entrepreneur. "I'm not saying I agree with it, I'm just saying what's fact based on plausible growth in technology."
How true is this? And how close are we? At IDTechEx, we take pride in cutting through the hype, to reveal what is actually possible and where the real opportunities lie.
Despite being more famous for his music, Will.i.am is also chief creative officer of 3D Systems. 3D Systems are a market leader amongst 3D printer manufacturers, their 2014 financial results showing revenue of $187.4 million for Q4 and $653.7 million for the full year. Details on all the key players in the 3D printing industry can be found in 3D Printing 2015-2025: Technologies, Markets and Players
It is true that the technology for 3D bioprinting is developing very quickly. Ink-jetting of biomolecules such as proteins, enzymes, antibodies and DNA was first achieved in 1988, and by 2004 ink-jet printing of mammalian cells was possible. According to IDTechEx research, the 3D bioprinting market will reach $6 billion by 2024. More information can be found in 3D Bioprinting 2014-2024: Applications, Markets, Players
3D printing is already fairly common in medicine for printing 3D models to plan complex surgeries, to make surgical guides, and to make prosthetics and orthopaedic implants. Dr. Kirsten Borchers of Fraunhofer Institute for Interfacial Engineering and Biotechnology, thinks biofabrication will be the next wave after rapid prototyping and then additive manufacturing. IDTechEx look forward to welcoming Dr Borchers to speak at 3D Printing Europe in Berlin on 28th April (for more information, and to register, see www.idtechex.com/3dp-europe). 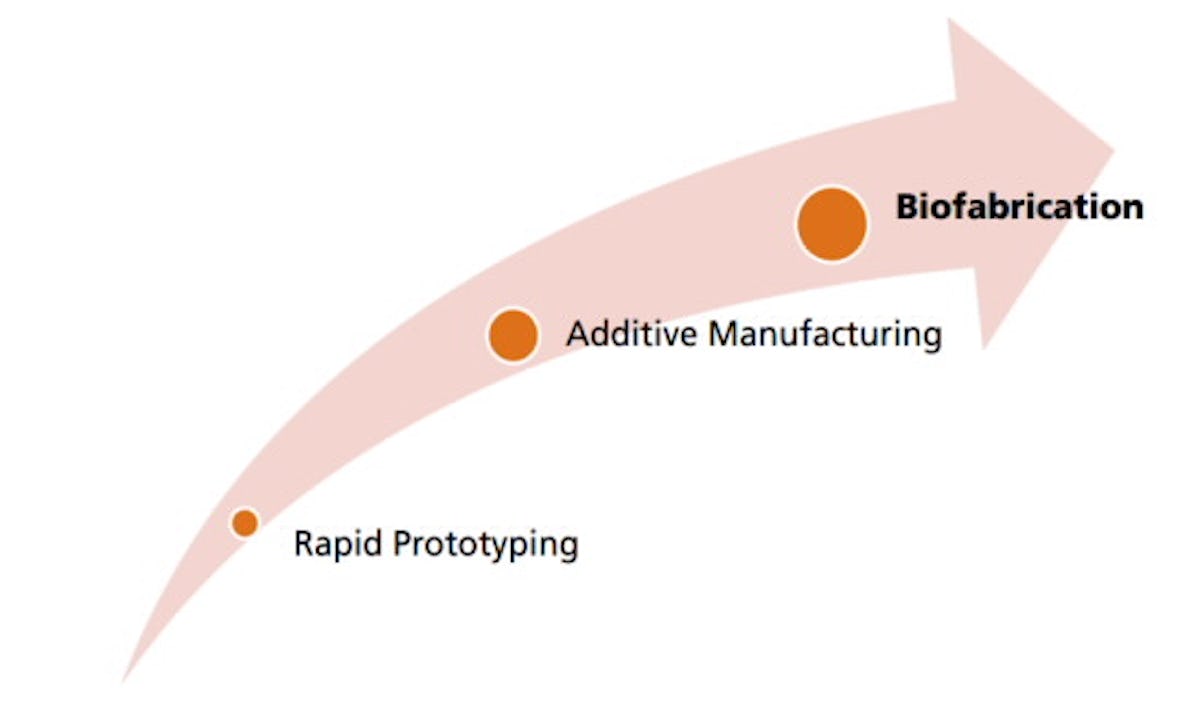 Source: Dr. Kirsten Borchers, Fraunhofer IGB
"If you can print a liver or a kidney... you're going to be able to print a whole person" according to Will.i.am.
But can we print a liver or a kidney?
The closest company at the moment is Organovo. They can print live cells up to 100% cellular concentration. Their first commercial product is liver tissue, because of its importance in pharmaceutical research. They are using it to do custom research for drug discovery, toxicity testing, metabolism studies and to monitor drug-drug interactions. It includes the three major cell types found in the liver, but not all. 3D printing allows the cells have the right association and compartmentalisation, and its performance and behaviour is representative. The synergistic effect of the interaction between cells mean they live much longer than when separate. They can also print kidney, bone, blood vessel, and lung tissues.
The tissues live for around 40 days which is long enough to monitor biochemical interactions, genetic expressions and histology, but not even close to the lifetime needed for implants. The size is limited to 3mmx3mmx1mm which is big enough for biopsy, but again not a whole organ. The limitation is that lack of vascular system which means the tissue must be fed from the outside. More information on the work of Organovo is included in Applications of 3D Printing 2014-2024: Forecasts, Markets, Players
Top image of human liver tissue source: Organovo

Biden's Critical and Emerging Technologies: Areas To Watch
Top Technology Trends 2021 - with IDTechEx Insights
3D Printing Meets Meat in the Largest Cultured Steak Ever Made
The Most Significant Advanced Materials News from 2021