The 3D printing industry continues to go from strength to strength. So much so that, depending upon your definition of "robot", half of the market value for industrial robotics will be robots working as 3D printers by 2026. The growth of 3D printing is mapped out in the report 3D Printing 2015-2025: Technologies, Markets, Players.
The word "robot" comes from the Czech word "robota" which means forced labor. Dictionary definitions of robot usually refer to machines that perform repetitive tasks autonomously or under computer control. More formal definitions vary with many including more specific criteria such as the ISO 8373 definition of industrial robots as "An automatically controlled, reprogrammable, multipurpose manipulator programmable in three or more axes, which may be either fixed in place or mobile for use in industrial automation applications." 3D printers are automatically controlled, follow reprogrammable instructions generated by CAM software and have at least three axes. The only difference between most 3D printers and a robot according to the ISO definition is, therefore, the presence of a multipurpose manipulator. Interestingly, there is a trend in the 3D printing world towards hybrid machines, ranging from the ZMorph to the DMG Mori Lasertec 65, that provide the best of both additive and subtractive worlds via an end effector that can either deposit material or mill it away. At least these hybrid machines clearly count as industrial robots according to the ISO definition.
According to the International Federation of Robotics (IFR), sales of industrial robots increased from 97,000 units in 2004 to 178,000 units in 2013. The years 2009 and 2014 were outliers with unusually low and high sales due to the recession and automotive retooling, respectively, giving an average annual growth of 6% in unit sales over that period. At the same time the average price of an industrial robot fell from $63k in 2009 to $53k in 2013 which equates to 4.2% fall in price per year. Consequently, the market value for industrial robotics is increasing at just 1.6% CAGR from $9.5bn in 2013. This leads to a surprisingly tame market forecast of just $11bn in 2026.
The 3D printing market is detailed in the report 3D Printing 2015-2025: Technologies, Markets, Players. In particular, the market for industrial 3D printers (excluding materials and services) which stands at just $1.2bn in 2015 is much smaller than the industrial robotics market today. However, the 3D printing market is forecast to grow at a much healthier 20% CAGR on average over the next 10 years. This growth is fuelled by increased depth of use by existing users such as aerospace as well as the emergence of completely new uses such as bioprinting.
Consequently, the market value of 3D printers will reach that of industrial robots in 2016: 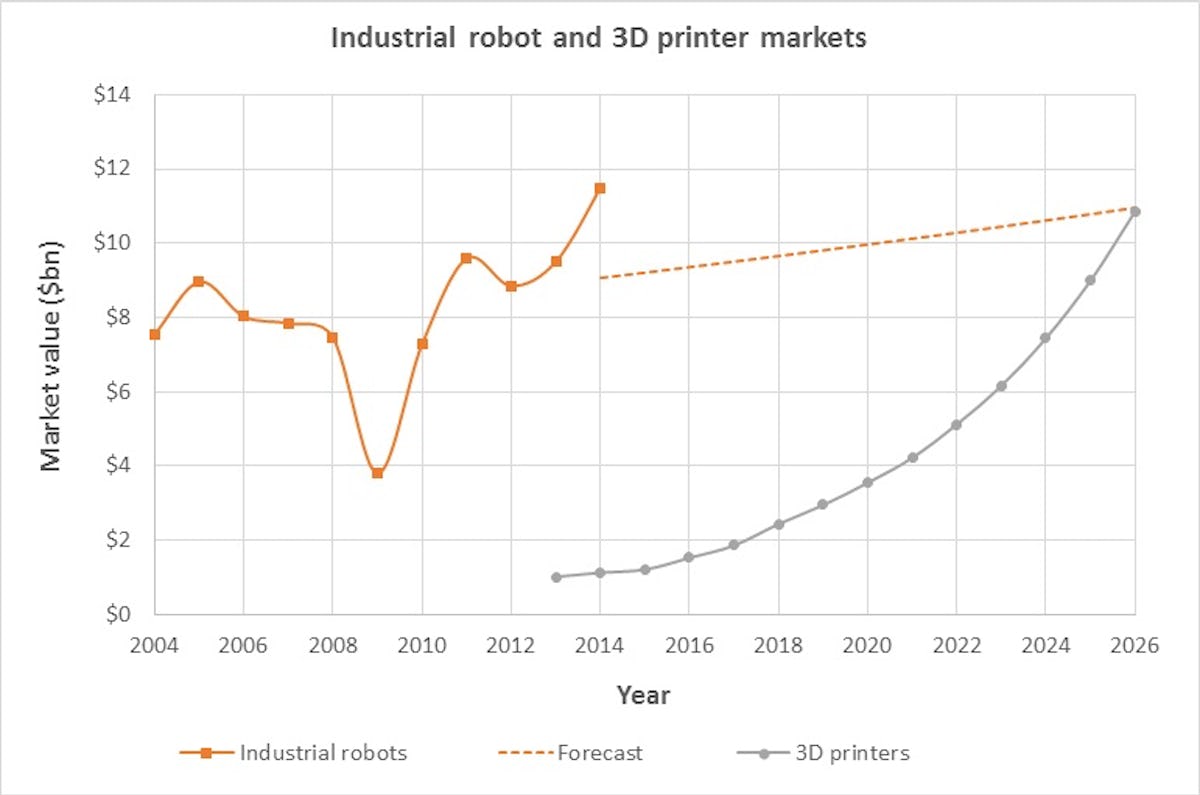 Source: IDTechEx
This illustrates the increasing importance of 3D printing in industry. Although the growth in industrial robots is lacklustre other sectors of robotics stand to grow considerably over the next 10 years including personal robots such as vacuum cleaners, professional robots such as surgical assistants and military robots.
For more information about 3D printing markets including 10 year market forecasts, please read our report 3D Printing 2015-2025: Technologies, Markets, Players.

Biden's Critical and Emerging Technologies: Areas To Watch
Top Technology Trends 2021 - with IDTechEx Insights
3D Printing Hardware: On Its Way to an $9.9 Billion Peak
The Most Significant Advanced Materials News from 2021