HP first launched their Multijet Fusion concept in October 2014, and has been teasing us with snippets of additional information ever since. There has been endless speculation on the impact this is having and will have on the industry. Today, HP has started taking orders for the first products, the first of which will be shipped by the end of 2016. HP expect sales to ramp up conservatively over the next few years. The first target is model shops and service bureaus, and the co-developers included Materialise, Shapeways and Protolabs.
Multijet Fusion is being positioned as a truly industrial technology, and poised to take a share of the $12 trillion global manufacturing market. HP does have experience converting the 2D printing industry to digital production.
HP knows that 3D printing only makes sense for high value personalised items or for short production runs. There has been no announcements about specific applications, but the solution has been co-developed with BMW, Jabil, Siemens, Nike and Johnson & Johnson, which gives some indications as to the industries they are targeting. The cost-per-part can be 50% lower than existing technologies. Based on internal testing and public data, HP Jet Fusion 3D printing solution average printing cost-per-part is half the cost of comparable FDM & SLS printer solutions from $100,000 USD to $300,000 USD on market as of April 2016.
The inkjet technology allows parts to be built at over 340 million voxels per second. Based on internal testing and simulation, HP Jet Fusion 3D printing solution average printing time is up to 10x faster than FDM & SLS printer solutions from $100,000 to $300,000 on the market as of April 2016. 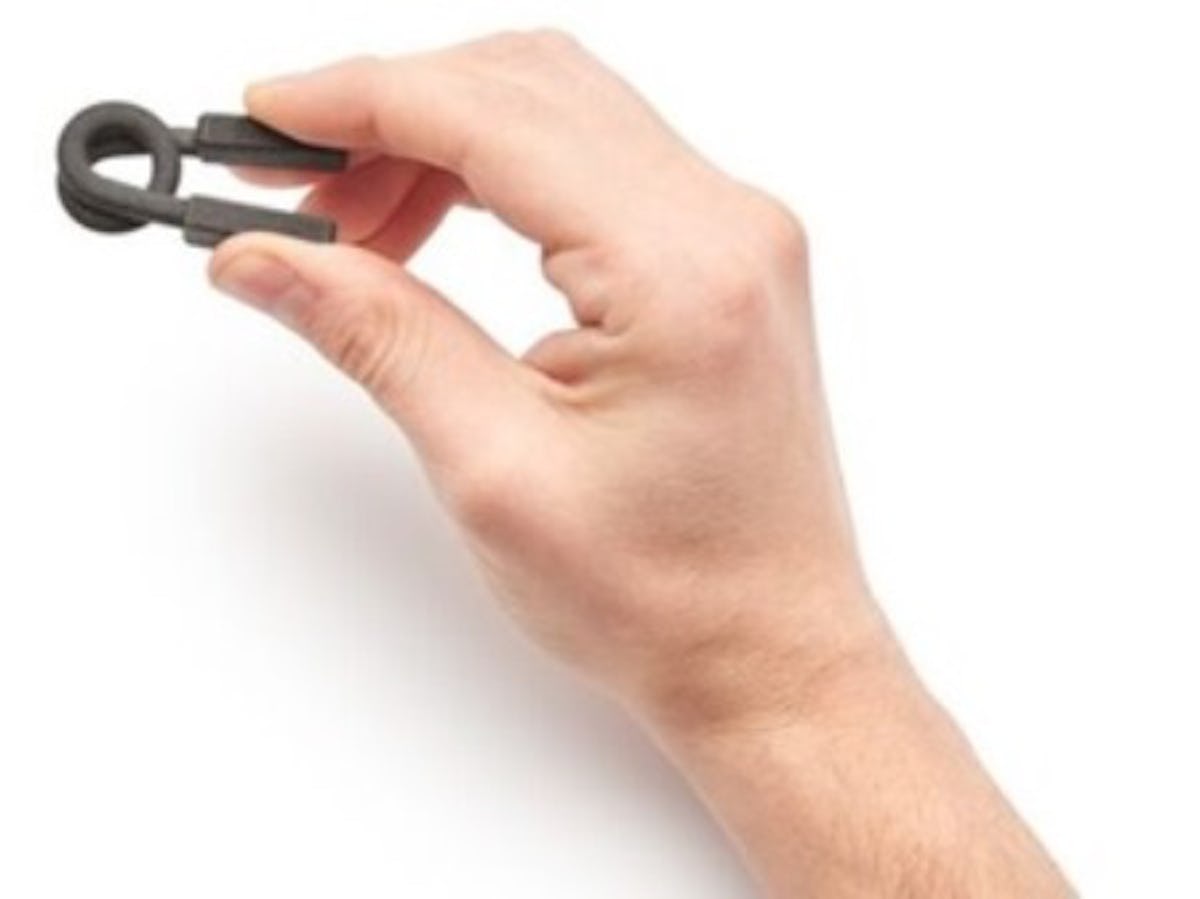 Image: Part manufactured using a Jet Fusion 3D Printing Solution. Source: HP
Two models will be available, the 3200 and the 4200. The 3200 will work with 20kg of material, and is expected to be used by smaller model shops. The 4200 is for higher usage and industrial manufacturing. It has more advanced parameter control, five times faster cooling for 25% faster end-to-end speed, layer-by-layer heat maps for better reporting and traceability, and a 30% reduction in running costs by using 200kg of materials for a lower cost per part.
The "3D print unit" can be moved from the pre-processing unit to printer and then to a post-processing unit for controlled cool down, part removal, and powder refresh. This complete manufacturing solution increases efficiency. It has been missing from the 3D printing industry, but was expected from HP's product.
The software for job submission and preparation, and printer management is also included. HP is a founding member of the industry consortium that developed 3MF, an improved 3D printing file format. The HP Jet Fusion3D Printing Solution is the first 3D printer to be fully compliant with this industry-leading standard.
The 3200 will retail for $130,000 or $155,000 including the post-processing station. This puts it in-line with material jetting machines, and significantly cheaper than the high-end thermoplastic extrusion or selective laser sintering machines. HP are working with value added resellers who have access to relevant end users in specific markets. Resellers will sell machines and consumables, as well as providing support and servicing. 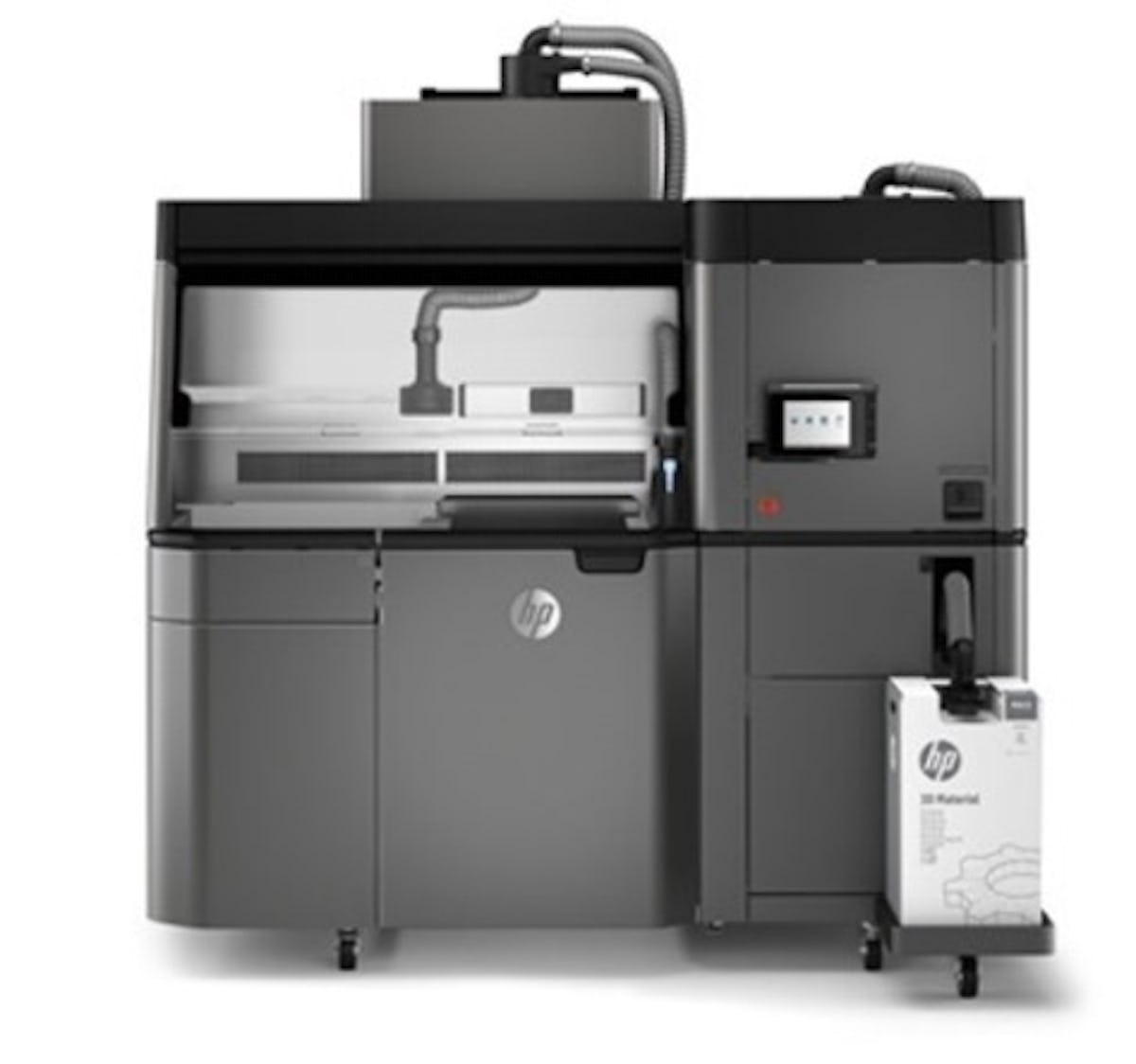 Image: The 3200 workstation. Source: HP
HP-branded powder materials will be available initially. PA11 and PA12 will be available at the end of 2016. HP High Reusability PA12 has the highest post-production surplus powder reusability compared to other powder based 3D printing technology using PA12 material. Consistent performance is achieved with only 20% powder refresh rate.
Glass-bead-filled nylon and fire-retardant material are expected in Q1 of 2017. Elastomers and higher performing materials are expected during 2017. These early materials mean it is competing most closely with Selective Laser Sintering. The platform is also open for materials innovation, so Lehmann & Voss, BASF, Evonik and Arkema are all developing materials. 3D printing of ceramics is in the roadmap, but Multijet Fusion has not been designed to work with metals.
HP have been clear that their Multijet Fusion technology is not a binder jetting technology nor a material jetting technology. It is a powder-bed process, but it is not selective laser sintering. A fusing agent and a detailing agent are inkjetted onto a layer of powder, using HP thermal inkjet heads, which have received millions of dollars of investment over many years. Then HP patented Thermal Light technology is used to fuse the part together. The detailing agent changes the thermal conductivity of the voxels outside the part to give sharp edges. This layer-by-layer process means it can be much faster than a point-by-point process such as FDM or SLS. It also has a more predictable "time to print".
The voxel-by-voxel control means each 20 micron by 20 micron area within each layer can have different properties. Theoretically, colour, roughness, translucency, flexibility, and electrical conductivity can all be controlled, but it is unclear which of these will be available in the first generation. Except that it will be monochrome, colour will not be available until the second generation. Voxel control also adds possibilities for building in security markers and tracers.
Multijet Fusion can print "functional parts" in nylon. Test have been shown to withstand tension and torsion, with excellent interlayer strength. There are also possibilities to eventually include sensors and electronics.